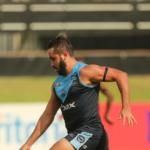 THE new year tossed up some predictable results in Round 12 of the Northern Territory Football League (NTFL) Men’s Premier League, but Darwin and Southern Districts played out a cracker in the weekend’s sole top five clash. While the Buffs closed the gap on their weekend opponents in the race for a top three spot, the remaining finals-bound sides went about solidifying their standing in the top five.

It was business as usual for St Mary’s as it trounced Wanderers by 63 points to open Round 12 on Friday night. In a contest that was largely competitive until midway through the third term, the Saints kicked away against a tiring Eagles side to cap the 14.17 (101) to 5.8 (38) result.

After a tight opener, the Saints looked to be pulling away to a straightforward victory after jumping out to a five-goal half time lead. But the Muk Muks gave their all to mount a short-lived comeback after the main break, booting the first three goals of the term to draw back within four points of the finals-bound Saints. Unfortunately, the Eagles spent all their fuel tickets on the fightback, leaving nothing left to edge in front as St Mary’s ruthlessly pulled away with five goals to nil in the final quarter. There were still positives to be drawn from the loss for Wanderers, with the returning Joel Jeffrey showing off all of his talent in the air and at ground level to go with two classy goals, while Braedon McLean’s energy in the middle was terrific in the third term. For the winners, 10 individual goal kickers were led by Joseph Salmon‘s three majors, but it was Ryan Smith who was named best afield as the likes of Thomas Davies and Nick Yarran also contributed.

Winning form is good form for the Saints, especially with two of its fellow top three sides immediately ahead on the fixture list and other sides closing in on second place. For Wanderers, the last chance finals saloon opens with a game against the winless Palmerston, which is now a must-win with Tiwi 14 points adrift in fifth.

Southern Districts has been made to rue a miss after the siren in its dramatic five-point loss to Darwin Buffaloes in a top five eight-pointer. Rory O’Brien pulled his set shot to level the scores after marking a Michael Barlow kick 25 metres from goal, sealing the unfortunate 13.9 (87) to 12.10 (82) loss.

The result looked dead and buried as David Miles kicked truly into an open goal late in the third term, punishing the Crocs for their inability to convert up the other end. A fifth goal to Daniel Stafford in the final term to push the margin back out to 11 points with under 10 minutes left looked to again have sealed the result, but it did not deter the Crocs as they doubled their goal tally in a single stanza. It proved futile in the end as O’Brien failed to convert and snatch the draw, but made for great viewing on the neutral end. Earlier, Stafford and Brodie Foster combined for seven of the Buffs’ eight first half goals, with skipper Jarrod Stokes also extending his influence to the scoreboard. Davin Hall led the response for Southern Districts with three majors in just his fourth game for the season, while Josiah and William Farrer also chimed in with two apiece as Barlow found plenty of the ball to very nearly prove a game winner.

Three more top five opponents lie ahead for Southern Districts, with each result massive in deciding positions three to five. Meanwhile, the next few weeks will be a mixed bag for Darwin, set to test its premiership credentials against the competition’s benchmark next week, while also facing two bottom three opponents in the following rounds.

The mid-season break only heightened Nightcliff’s hunger for goals as the reigning premier put on a scoring masterclass against Waratah, winning to the tune of 138 points. 12 Tigers found the goals in the 25.11 (161) to 3.5 (23) romp as the ladder leaders dominated across the ground.

A four-goal opening term was Nightcliff’s lowest-scoring period, following it up with nine majors and six in each quarter after half time to see out the huge victory. While their ruthlessly precise finishing inside 50 was ultra-impressive, the Tigers were just as good further afield as they kept the Warriors goalless across the second and third terms, while only conceding a high of two in the final period of play. Waratah had to wait until seven minutes into the fourth quarter for its second six-pointer, ending a massive period of unanswered goals. John Butcher was the Tigers’ chief destroyer with his half-dozen majors, but two non-scoring players – Kaine Riley and Phillip Wills – made their impact felt up the ground to be named in the best behind Shaun Wilson. Kim Kantilla again proved hot to handle as one of the few Warriors to stand tall, booting two of his side’s three majors in the absence of some of their prime movers. Daniel Simpson also found room for a celebration after finding the big sticks in the final term despite the massive margin.

It does not get any easier for Waratah with Tiwi next on the agenda, but respite should come with consecutive fixtures against fellow bottom three sides to round out January. Up the other end of the ladder, a month of competing against top five opponents could dislodge Nightcliff from first place, but the Tigers have already proven their worth against the best of the rest.

Tiwi was quick to shake off Palmerston in Round 12’s final fixture, overpowering the Magpies to come out 61-point winners. Both sides had trouble converting at times, but the Bombers’ wealth of opportunities proved far too much for the struggling Magpies in the 7.10 (52) to 16.17 (113) loss.

After very nearly overcoming the Bombers in Round 5, Palmerston looked like providing a good challenge to its opponent once again, keeping touch for just over a quarter. But Tiwi soon clicked into gear with six goals to two to set up the win, consolidating with another half-dozen majors in the final term to pretty up the scoreboard. Both sides had at least seven individual goalkickers, but it was the Bombers’ five multiple goalkickers which proved the difference as no Magpie managed to trouble the scorers more than once. Austin Wonaeamirri and Harley Puruntatameri each booted a game-high three goals, but it was Dion Munkara who was judged best afield for the winners. Kyle Emery impressed for the Magpies, but he was unable to provide the goals needed alongside usual goal-getter Keidan Holt-Tubbs as the Bombers well and truly outgunned them with speed and class across the ground.

A twelfth loss sees Palmerston still 12 points adrift of seventh, but the opportunity to grab a breakthrough win may come knocking with two bottom three match-ups set for the Eagles upcoming fortnight. Waratah is next up for Tiwi, but the tough month following that fixture makes it a must-win for the Bombers as hopes dwindle among the bottom three.