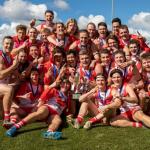 OVER the weekend, the Clarence Roos were able to defeat the Launceston Blues in the Tasmanian State League (TSL) Development League grand final at UTAS Stadium. The Roos had plenty of standout performers, including forward Bryce Alomes, who starred up forward with five goals. His dominance forward of the ball allowed his team to gain and maintain a match-winning lead, and will be a key performance of reference for AFL scouts in the next few years as his draft hopes increase. Alomes has shown in the past that he has the ability to find the ball around the ground, but a bag of five in a grand final demonstrates how dynamic he is across the ground.

The first quarter saw the Blues get off to an inaccurate start while the Roos made the most of their chances, and Alomes was a part of this. Teammate Oliver Preshaw cut off an errant kick from the Launceston defence, and found Alomes on a strong lead 35m out from goal on a fair angle. It looked a tough task, given the windy conditions at time, but the number 58 was up to the challenge. Alomes booted the ball as straight as an arrow, with the goal umpire barely moving thanks to a beautiful kicking action. After putting his side two goals clear, Alomes spent much of the remainder of the term as a deep forward, with the Roos understanding of his strong leading presence despite his 189cm height, with skill and IQ make him just as big a threat as a key marking forward. A kick to his lead inside-50 fell just short, but the Launceston rebound didn’t last long with Alomes nearly taking a huge pack mark from a long ball deep into the forward line. He wasn’t able to reel in the mark, but was able to bring the ball to ground. History repeated itself, when only minutes later, he nearly reeled in another massive clunk, but despite controlling the ball for much of the journey, the mark was not paid.

Alomes started the second quarter still in the thick of the action, booting the opening goal of the term, marking the ball uncontested 20m out from goal with no angle, and the kick was no problem for the 17-year-old. Alomes remained a deep forward, which was the smart move given how dangerous he had proved to be so far in the contest. With the Blues booting goals down the other end to take the lead, it was Alomes who provided the spark for his side. Taking a mark 30m out in the left pocket, the forward once again was cool and calm in his approach, and booted his third goal of the match, proving to be a massive headache for Launceston coach Kane Sanders. Remarkably, he was yet to produce his best work, kicking an outstanding goal late in the second term. Alomes gathered a miskick from a teammate hard against the boundary line in the forward pocket, spun off a defender and booted an incredible goal from the tightest of angles. It showed not only skill, but composure to deliver under pressure, booting his fourth consecutive goal for his side.

Given his first-half dominance, the Blues changed things around at the main break in an attempt to make life difficult for Alomes, often leaving a second defender nearby to counteract his aerial prowess. This wouldn’t stop the red-hot forward, who booted his fifth goal after gathering the ball 25m out from goal and snapping around his body to truly claim the contest as his own. The remainder of the contest was unfortunately quieter with Launceston putting a lot of work into curbing his influence, but there is no doubt Alomes was a crucial factor in leading his side to the 2021 TSL Development League flag. 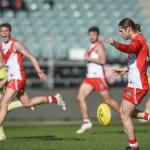 THE Clarence Roos proved too good for the Launceston Blues in the Tasmanian State League grand final, taking down the reigning premiers to the tune of 14 points at the University of Tasmania Stadium on Sunday afternoon. The Blues entered the match in search of back-to-back flags, but Clarence showed that they were the superior side, storming home in the final term to put the nail in the coffin and hop on the bus back to Hobart with premiership cup in hand.

The Blues had control of the game early, generating plenty of scoring opportunities in the first half of the first quarter, but couldn’t convert their hard work into scoreboard pressure, and it was their opponents who made them pay. The Roos booted the first major of the game through Jacob Young, with the goal set up by a blistering run from Jacques Barwick. Clarence shortly followed this up with another goal through Bryce Alomes and suddenly, the Blues found themselves on the back foot. It took some composure from the Blues backline to steady the ship, as speedy defender Jake Rice find teammate Jett Moloney to put Launceston on the board. Clarence entered the second term with a two-point advantage, and this looked to extend with a miraculous major from Wade Wall, but it was deemed touched. The Roos looked to break away again, with Alomes booting his second, but Blue Grant Holt brought his side back into the contest. The Blues finally hit the front with Moloney converting his second, and tempers began to flare. Launceston extended their lead with another major, but Alomes took control of the game, kicking his side’s next two (which was also four in a row for him), and the sides went into the main break all square.

The third term saw Alomes boot his fifth of the contest and the Roos start to build and hold a two-goal lead. Things looked to be one-way traffic, but Blue Colby McKercher booted a goal late in the term for his side, to bring the margin back down, and give Launceston a chance at consecutive flags. The fourth quarter saw scoring dry up, as the Blues missed their chance to reduce the margin to less than a goal, and neither side could gain an advantage. A strong contested mark from Roo Oliver Preshaw, who saw plenty of experience at senior level this year, thwarted a Launceston attack, and then it was Barwick who booted two goals in a minute to hand his side a match-winning lead, and the 2021 premiership cup.

For the victors, Luke Swinton claimed the medal for the player judged best afield, with his excellent work both at stoppages and on the open wing catching the eye of voters. Five-goal forward Alomes was also dominant, with the Blues backline seemingly having no answers for his play at times, while Barwick was also extremely damaging. For the Blues, McKercher’s third term was electric and kept his side right in the hunt. 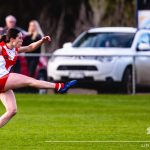 CLARENCE will hit the road to take on Tigers in the standalone game of the Tasmanian State League (TSL) Women’s season on Saturday. The Roos sit second on the ladder and cannot be dislodged from the top three, but can temporarily take top spot by moving four points clear at the top of the table. For the Tigers, they are running out of time to grab a couple of wins and sneak into finals, and will hope that they can cause an upset in this one.

Clarence has won five of its six games, with its only loss coming against Launceston in mid-August. This will be the first time since then they have played back-to-back games over two weekends, with a bye following that loss, and then also in between the Roos’ wins over Glenorchy and then last week, North Launceston.

Tigers have struggled this season, but after not being able to score a goal in their opening match, have been able to put one through the past five matches. They still have some way to go to catch North Launceston on percentage, but an upset win here and a victory against the Bombers would see them avoid the wooden spoon and play finals.

The last time these sides faced off, Clarence won by 10 goals, booting 6.3 to 0.0 in the first half, before securing a 10.6 (66) to 1.0 (6) win at Richmond Oval. Amy Edmand slotted four goals in a best on ground performance for the home side, as Brianna Oates, Louisa Marmion and Amy Prokopiec all impressed for the red and whites. In the yellow and blacks, Lilly Ellis kicked the sole Tigers goal in the third term, while Mimosa Middleton Miller, Priscilla Odwogo and Hailee Baldwin were all among the best in a losing side.

As a whole this season, Jessie Williams is leading the goalkicking for Clarence, slotting 12 goals for the season to sit three off the pace from Glenorchy’s Sarah Skinner. With the Roos playing Launceston in their final game, this could be a huge chance for Williams to catch up to Skinner in the run home. Other major goalkickers are Edmand (seven), Jacinta Limbrick (seven) and Prokopiec (four). In terms of top performers, the experienced North Melbourne talent in Nicole Bresnehan, as well as Bronte Scott have both stood out.

For Tigers, they have had five individual goalkickers, with Ellis, Odwogo, Brooke Phillips, Elsie Lamb and Phoebe Parsons all getting their name on the board this season. Odwogo and Baldwin have been the stars, showing why they are so highly rated as teenage talents, among the bests four times, with Mikayla Absolom and Middleton Miller also featuring in the bests heavily.

Clarence are strong favourites here and expect the Roos to get the job done comfortably, but the Tigers would love to improve their highest score and also try and restrict the Roos’ scoring.