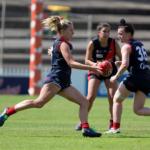 ROUND 5 of the South Australian National Football League (SANFL) Women’s competition had it all, from a goalless game, to a dominant performance by the premiership favourites, and established teams reasserting their dominance on the new sides. It was a Saturday to remember as the round marked the halfway point in proceedings.

In a game that will no doubt be remembered for its goalless finish, Sturt will care little after taking home its first win for the year, in the 0.5 (5) to 0.3 (3) victory over Glenelg. They scored three of their five behinds in the first half, and despite a flurry of late behinds by the Tigers, managed to hold on in the unusual two-point win. The loss was devastating for Glenelg who scored three behinds for the second week in a row – marking back-to-back defeats. Glenelg laid more tackles, had more disposals and won the inside 50 count, but it meant little in the end. Sophie Hoyle was the top ball winner for the Double Blues with 20 touches, three marks, five inside 50s and four tackles, while Maya Rigter picked up 17 disposals, one mark and laid eight tackles. Georgia Bevan and Jess Schulz combined for 28 disposals and 11 rebounds, while Kate Harris tried her best to get the ball moving forward with four inside 50s from her 12 touches and seven tackles. For Glenelg, Chelsea Packer was the standout ball winner with 20 disposals, two marks, five tackles and two rebounds, while Lucy Bellinger tried to make things happen in the forward half with 18 touches, five marks (one contested), two tackles and four inside 50s. Caitlin Gould (18 disposals, 21 hitouts and six tackles) was terrific around the ground, while Lucy Armitage was also busy through the midfield, collecting 18 disposals, while laying 10 tackles and having four inside 50s and three rebounds. Glenelg have the toughest task in Round 6 with a trip to face Norwood who are steaming ahead, while Sturt while hope to go back-to-back with a victory over West Adelaide.

In a one-sided affair, the undefeated Norwood flexed its muscles with a commanding 63-point victory over the in-form West Adelaide. The Bloods could only manage a point throughout the contest, held scoreless in the final three terms. The Bloods put together a consistent four quarter effort rather than a dominant single term, booting two goals in three of the quarters, and three goals in the second term on the way to a 19 scoring shot to one performance. Alison Ferrall was the key goal kicker for the Redlegs, booting three majors from nine disposals, four marks and two inside 50s, while Hannah Dunn and Monique Hollick both capitalised with a goal each. Dunn missed a couple of opportunities in front of goal but still was prolific with 20 touches, three tackles and two inside 50s, while Hollick took 10 marks to go with her 24 touches. The standout player however, was Najwa Allen who suffered leather poisoning once again with 33 touches, six marks, four inside 50s and two tackles. Sophie Armitstead had 17 disposals, three tackles, four inside 50s and a goal, while Leah Cutting returned to have an impact in the ruck with 23 hitouts from nine disposals and seven tackles. For West Adelaide, Madison Newman was superb in defence, producing a massive nine rebounds and laid three tackles to go with 22 disposals (20 kicks). Lauren Rodato (17 disposals, three marks, three rebounds) also tried hard, while Chelsea Biddell had nine hitouts and 13 disposals, while getting back for five rebounds. In Round 6, Norwood hosts the out-of-sorts Glenelg, while West Adelaide will hope to bounce back against Sturt.

North Adelaide ended Central District’s winning streak with a three-goal victory. The Roosters held the Bulldogs scoreless in the first term as captan, Nadia Von Bertouch took just 63 seconds to salute with a major, while leading goalkicker, Kelly Barltrop scored her first midway through the term. Central hit back in the second quarter as Katelyn Rosenzweig converted just a second later than Von Bertouch’s first quarter major, while Jessica Sedunary made it two goals as the Bulldogs cut the deficit to just a point by holding the Roosters scoreless in the second. The teams traded blows in the third term as Cristie Castle got the home side off to the perfect start, before Sedunary and Barltrop added their second majors of the game for North Adelaide to lead by eight points at the final break. Barltrop became the match-winner in the final term with back-to-back goals in the space of three minutes to seal the game in a 6.5 (41) to 3.5 (23) win. Barltrop booted 4.1 from a remarkable five kicks, while also only taking the one mark. Von Bertouch stood tall in the crucial game, collecting 22 touches, three marks, six tackles and seven inside 50s, while Jane Altschwager had 16 disposals, five marks (two contested) and 12 hitouts working hard through the ruck. Rheanne Lugg (15 touches, two marks, two inside 50s) and Emma Sampson (11 disposals, five inside 50s) were also prominent for the winners. For the Bulldogs, Sedunary was also the top ball winner, racking up 17 disposals, four marks (one contested), five inside 50s, five tackles and two rebounds to go with her two goals in an all-round game, while Danielle Stewart also had 17 touches, as well as seven tackles. Demi Sonneman and Gemma Doughty were rocks in defence in the face of the onslaught, combining for 11 rebounds, 11 tackles and 19 disposals. Next week North Adelaide takes on the winless Woodville-West Torrens, while Central District travels to face South Adelaide at Flinders University Stadium.

In the final game of the round, South Adelaide produced a clinical win over Woodville-West Torrens, putting the game to rest after a tight first quarter. Both sides managed two goals apiece as Kiana Lee and Caitlin Sampson booted the opening majors to stun the Panthers early and lead by nine points. As if whipped into action, Teah Charlton and Madison Bennett quickly got on the board late in the term for South to take the lead at the first change. Little did they know, the Panthers would dominate the scoreboard over the next three quarters, particularly up one end of the ground. Charlton headed into the main break with three goals to her name as the Panthers held a 21-point lead at the main break. The Eagles restricted the home side to just five behinds in the third term, but could not score themselves, before South’s dominance became evident in the final stanza, pouring on four goals to zero. Charlton finished the day as the most dominant player on the ground with an unbelievable game, booting three goals from 24 disposals, five marks (four contested), a whopping 16 tackles and three inside 50s. Nicole Campbell (20 disposals, three marks and six inside 50s) and Hannah Munyard (20 disposals, five marks and five inside 50s) were once again standout performers, while Czenya Cavouras laid seven tackles to go with her 18 touches. Bennett’s two majors also came with two marks, six tackles and four inside 50s, while Emily Brockhurst had a game-high eight inside 50s as well as 13 disposals and four marks. For the Eagles, Lee had 15 touches, four marks and three inside 50s as well as a goal, while Jovanka Zecevic finished with a team-high 16 disposals, one mark, four tackles and three reboudnds. In defence, Natasha Farrier was busy with six rebounds from 13 disposals, four marks and six tackles, while Tesharna Maher had two rebounds, three tackles and three marks to go with her 15 disposals on the day. In Round 6, South Adelaide hosts Central District, while Woodville-West Torrens will search for its first win against North Adelaide at home.