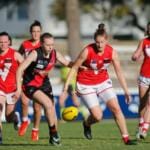 THE top four sides face off against the bottom four sides this round in the South Australian National Football League (SANFL) Women’s competition, in a week where finals can just about be locked in. Norwood is secure, South Adelaide is all but in barring a catastrophic end to the season, and North Adelaide has a soft run home. For West Adelaide, Round 8 provides a chance to get breathing space on Glenelg, while for Sturt and Central District, there are no second chances in the final few rounds. Woodville-West Torrens is still searching for its first win and will be hoping to upset North Adelaide this weekend.

The top-of-the-table Norwood travel to Peter Motley Oval to take on Sturt, which experienced its best win of the season last week, running over the top of Woodville-West Torrens to keep the Double Blues faint finals hopes alive. Unfortunately for the underdogs, a loss here and it is curtains on season 2019. West Adelaide is eight points clear in fourth, and playing Central District, with a win to the Westies making it impossible for Sturt to make it if the Double Blues lose, while even if they win, they need to hope their rivals do not pick up another win. To Sturt’s credit, they have headed in keeping the same team that found winning formula, with Zoe Prowse and Lilla Berry both added to the side. For the Redlegs, they have lost three players through injury and suspension, with Rhiannon Busch (suspended), and Jane Fitzgerald and Elisha Gallagher (both injured). Into the team comes seven players on an extended interchange bench, with Jo Hill named at centre half-back, while Ellen D’Alessandro is in the back six, while Kate Fenton and Cassie Tsoumbris have been added to the midfield rotation. Norwood’s midfield is the most superior in the competition, and along with South Adelaide’s, knows how to just get the job done when down. Najwa Allen has leather poisoning most weeks, and has been named at centre half-forward in Round 8, while Hannah Dunn and Matilda Zander will be crucial rovers to Leah Cutting who is enjoying a good season. luckily for Sturt, the midfield is where the Double Blues also hold plenty of cards, with clearance gem, Georgia Bevan, Maya Rigter and Caitlyn Swanson all capable of winning the ball then going forward and creating scoring opportunities. Alex Ballard will provide run out of defence, while Monique Hollick and Sophie Armitstead will do the same for Norwood.The Redlegs are heavy favourites in this clash and it is hard to see an upset given the depth of the team across the field, but if Sturt can get a fast start, and follow up its work from the week before, anything is possible.

There will be a sense of deja vu when these sides meet on Saturday evening, having played at the same venue against each other just a week earlier. In that game, South Adelaide were too good, coming away with a 28-point win over the Tigers. From last week, the Tigers have gone in adding potential goalkicking forward, Hannah Crump, and Chelsea Packer to their side, while the Panthers have welcomed back Montana McKinnon after missing due to AFL Women’s Academy duties. They have also added Stacey Huddleston to the starting 18, named in the back pocket alongside the reliable Jaslynne Smith. There is no surprise that South Adelaide will be favourites in this game, having not lost since Round 1 and looking every bit the main challenger to Norwood. The midfield of Hannah Munyard, Czenya Cavouras, Nicole Campbell and Elyse Haussen is as good as any, while McKinnon and Teah Charlton add youthful excitement inside 50. Mykala Walker-Murphy has stood up in recent weeks, and with Cheyenne Hammond patrolling the backline, the Panthers have talent across the field. Glenelg is also capable to causing an upset, but unlike the Panthers, come into the game desperate to get out of a run, having lost five games on the trot since bursting out of the blocks with three wins. Lucy Bellinger looms as the danger for the Panthers with the Tigers sharpshooter able to hit the scoreboard and set up her teammates. Ellen Fauser through the middle with Cassie Hartley will no doubt find plenty of the ball, while Tess Morcom and Sam Franson provide good strength and stability in the back half. They will need some luck, and plenty of direct football to topple the mighty Panthers who have one eye on the finals, but Glenelg’s finals hopes are fading, and a loss here would almost certainly spell the end for season 2019 after a promising start. Meanwhile a win for South Adelaide guarantees the Panthers a top two spot.

While the Tigers/Panthers game has serious finals ramifications, spare a thought for the Bulldogs/Bloods match which will ultimately decide more than one team’s fate this season. If West Adelaide gets up as one would expect the Bloods to, they are all but booked into finals unless Glenelg upsets South Adelaide, and in the process, slamming the door shut on both Sturt and Central District in season 2019. West Adelaide can still grab third too as the Bloods are equal with North Adelaide on points despite a loss to them last week. Given the Roosters face the three bottom teams over the three rounds, this is simply a must-win for the Westies, who while facing the two bottom sides, also have a date with South Adelaide in the final round. But keeping it simple, a win should be enough to book a finals spot. Both sides have opted for a number of changes, and Central District brings back some serious talent with full-forward Katelyn Rosenzweig and captain Nicola Biagi back into the line-up. For the Bloods, Rachelle Martin returns and is a massive inclusion to the on-ball brigade. Chelsea Biddell was quiet last week with just seven touches and three marks, and one can expect a dominant goalscorer to not stay down for too long. She looms as a massive task for the Central District defence, while Niamh Davis could be the one tasked with restricting Rosenzweig who while inaccurate, often finds plenty of opportunities inside 50. Kimberley Fry at full-back will steady the Bulldogs, while Jayme-Lee Sonneman and Demi Sonneman were terrific last week despite the loss, as was Gemma Doughty who has been a ray of consistency off the half-back flank. For West Adelaide, Abbie Ballard will be excited to have Martin back in the midfield mix, while Maddie Newman continues to just find the ball and perform. Helen Maidment is an underrated played in the Bloods line-up, while Melanie Elsegood is also capable of finding the big sticks with a goal a game so far this season. West Adelaide are favourites, but this is expected to be the closest game of the round, so tune in to see two teams battling to keep their seasons alive.

In the final game of the round, the struggling Eagles take on a reborn North Adelaide outfit at Maughan Thiem Oval. The Eagles are yet to win a game in their debut season, while the Roosters are starting to click into gear at the right time of the season. They looked shaky early on against the top sides, and dropped a game to Glenelg as well, but now they have their sights firmly focused on finals. While top two is realistically out of reach, another win will book their spot in the top four given their superior percentage to rivals. With the bottom three sides in the final three rounds, the Roosters could take full advantage of the draw and gather percentage and momentum heading into finals. North Adelaide has made two changes to the line-up with Alex Fittridge and AFL Women’s player, Brittany Perry returning to the line-up, while last week’s top disposal winner, Erica Greet is unavailable, as is Sarah Ellis. After spending most of the season through the midfield, captain Nadia Von Bertouch has been named at half-forward, and with Emma Sampson, Cristie Castle and of course competition leading goalkicker, Kelly Barltrop all in the forward 50, it makes the Roosters front half the most damaging in the league. Their midfield also has plenty of runs on the board with Paige Allen and Leah Tynan, while Jane Altschwager is among the best rucks in the competition, and Amber Ward is a rebounding machine at half-back. There are not too many weaknesses in the North Adelaide line-up and if you were up for backing a roughie in the competition, the Roosters are the perfect side to turn to now they are hitting their straps. Their opponents are the Eagles who have also made at least three changes, with Jaimi Tabb a notable inclusion to the side. They have had fast starts in recent times, but have struggled to go on with it, as Kiana Lee has been the key goalkicker inside 50. Georgia Taylor has been named at half-forward after starting the season in defence, while Natasha Farrier will also be hoping to provide support for Lee in the forward 50. Tesharna Maher and Jovanka Zecevic have been impressive in the back up, while a whole team effort will be required to get up in this game. North Adelaide should continue their winning ways of late, while for the Eagles, the power of breaking the winless drought is something that will keep them focused for the remainder of the season.