ROUND 3 of the 2020/21 NTFL Women’s Premier League season will see all four matches played on Saturday once more, with bottom of the ladder Tracy Village set to sit out with the bye this round. Nightcliff and Pint still remain undefeated at the top of the ladder after solid starts to the season, while this round will be headlined by a 2019/20 grand final rematch between Southern Districts and Waratah with both sides sitting towards the lower end of the ladder after two rounds.

Darwin Buffettes may have only played the one match for the season so far but well and truly exploded out of the blocks last week, compared to St Mary’s who showcased impressive form in Round 1 but could not consolidate on a huge third quarter fight back and eventually went down in a close affair with Pint. With so many quality players across the field and both teams seemingly in solid form heading into this match, expect the Saints to explode out of the blocks and the Buffs to use their flurry of forward targets to apply plenty of scoreboard pressure. Machaelia Roberts and Zoe Anderson fired on all cylinders last round for Darwin, booting four goals apiece, while both Michaela Long and Ash Melnikas have been handy goalkickers for the Saints. Melnikas and Megan Williamson have been named among the best in both matches for the Saints, while Molly Althouse impressed for the Buffs last round.

Southern Districts need a win this week in the grand final rematch to restore some of their 2019/20 dignity after a rough start to the season, going down by 48 points in Round 1 and 49 points in Round 2. While the Crocs are by no means lacking options up forward, they have seemed to lack that forward push and volume up forward, and this could be the side’s best chance to do so against Waratah with the Warriors also coming in off the back of a loss in Round 2 and a default victory in Round 1 – although the default came when the side was ahead. Just two players have hit the scoreboard more than once for Waratah, with usual suspect Jenna Singh and newbie Caitlin Couch kicking two apiece over the first two matches, while Danica Pedersen and Eliza Straford have been solid across the ground. For Districts, Megan Crauford is a solid target.

Palmerston will head into this round renewed after the bye, but come in against an improved Pint outfit that sits in second on the ladder with two wins from two. Pint has proved it has a heap of firepower and while an excellent first round victory showcased the side’s winning ability, it was a low-scoring victory in Round 2 that makes this battle so interesting given the side’s ability to outlast under pressure. Look for Amy Chittick and Jasmyn Hewitt inside 50 when it comes to Pint with both players able to hit the scoreboard, while Jacinta Reid, Rebecca Pryer and Cassie Henderson have had solid starts to the season. For the Magpies, fans will hope that Cassie Ormsby can return to the fray after a first round high hit that saw the match finish at half time. Meanwhile, Tabitha May is always a force to be reckoned with.

The lone match between two Round 2 winners, Nightcliff will come into this battle with plenty of confidence given they sit atop the ladder with a significant percentage boost ahead of Pint in second. Meanwhile, Wanderers have one win on the board which came in Round 2 and the significant margin in that match will see the side certainly take it up to Nightcliff. Expect an intriguing matchup here, with the top four goalkickers in the competition likely to take the field in this battle. That being said, three of the four are from Nightcliff who are arguably the team to beat at the moment given their firepower up forward and multitude of options inside forward 50. Emma-Lou Wolsey (eight goals), Mickayla Ward (five goals) and Darcy Elliston (four) have proved to be constant and consistent goalkickers out the front, sitting first, third and fourth on the leading goalkicker tally at this stage, with second spot taken by Wanderers’ Kaitlyn Armstrong who is just one goal behind Wolsey on seven. Just two players across the two teams have been named in the best twice – showcasing the calibre of talent across the two teams – with Ward (Nightcliff) and Djimila Totham (Wanderers) those players. 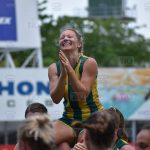 THE opening round of the 2020 NTFL Women’s Premier League season saw a number of blowouts, with Nightcliff, St Mary’s, Pint and Waratah getting huge wins on the board. Darwin Buffettes had the first bye of the season, watching on as some intriguing matches played out to open the season with a bang. A couple of new recruits, a milestone and a loss to the reigning premiers set the tone, and more in the first of our weekly women’s league wrap.

St Mary’s opened up their season and the 2020/21 season in style with an excellent 63-point victory over the Wanderers. While the Saints had a tougher time in the final quarter registering just seven points, it was a five-goal third term that pushed the side out to their excellent lead. St Kilda VFLW’s Claudia Whitfort was named among the best alongside Williamstown recruit Ash Melnikas, with the side seeming to gel with ease despite a heap of debutants, and continuing to push throughout. For the Wanderers, it just was not their day, although a couple of goals in the second half – both to Kaitlyn Armstrong – as well as the better defensive effort in the final quarter will give the side some solid moments to build off in the coming rounds, with Sophie Armitstead and Deanna Peckham named among the best.

A victory in Cassie Henderson’s milestone 100th match was just what the doctor ordered for Pint in an excellent 48-point victory over the reigning premiers, Southern Districts to start the season. While a great first half saw a 27-point buffer at half-time, the Queen Ants did not let up knowing the Districts’ ability to score quickly, and conceded just the one goal in an excellent outing. Amy Chittick and Jacqueline Downey booted two goals apiece while Katie Streader had the ball on a string and Jacinta Reid was a force to be reckoned with off the half back, while for the Crocs Megan Crawfurd was the lone goalkicker, named among the best alongside Essie Grose and Malory Nankervis who were relentless in their hunt for the footy.

It was a comprehensive and altogether dominant victory from Nightcliff, with the Tigers far too strong and with everything to play for after an improved 2019. Slipping straight up to top spot and not conceding a major throughout, Nightcliff had a complete day out with nine goals in the second half alone proving they had the firepower to get the job done. Emma-Lou Wolsey booted five goals to lead the tally, while Darcy Elliston (four goals), Mickayla Ward (three) and Rose Russell (two) all made their mark. With so much firepower up forward, Tracy Village just could not keep up with the Tigers despite the continued efforts of Meagan Wylie and Sarah Wilson who were named among the best. While the Tigers’ second half was not quite as accurate, booting eight behinds, Ward, Elliston and Eliza Morrison were excellent providing firepower across the field and proved that the Tigers could be a real team to watch this season.

A highly defensive effort was showcased in an intriguing battle that was cut short to finish the opening round, with the Magpies’ frontend failing to fire early but defensively showcasing some great attributes. Injury early in the second half saw the match finish on a difficult note, with Magpies’ Cassie Ormsby taken high and the match ended prematurely due to an ambulance call. Newcomer Caitlin Couch kicked two goals to start her season off well, and was a handy addition to the Waratah frontline slotting in nicely as the side kicked five unanswered goals, while Tabitha May, Khani White and Ormsby were named among the best for the Magpies. While the match ended abruptly, both teams have plenty to take out of this battle while Palmerston will be glad to have a bye in Round 2 to regroup and reset ahead of the coming weeks.