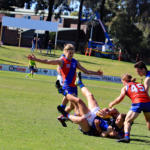 THE final four teams took to the respective playing surfaces in picture perfect conditions on Sunday morning with a number of intriguing questions to be answered. The week off can be of real benefit at this time of the year. Conversely, it can also be a curse and therefore it would be fascinating to see how Peel would return to action against a buoyant Claremont outfit. Meanwhile, old rivals West and East Perth met knowing full well that there was no second chance for the loser.

West Perth won their way through to a Preliminary final re-match with Claremont after a classy 33-point victory against rivals East Perth at a sun-drenched Leederville Oval on Sunday morning.

It was a keenly contested first ten minutes of play with the ball moving freely to either end but both defences holding strong. A quick passage of play doing the middle with Koopah Todd prominent led to the first goal for West Perth kicked by Ewan Brazier. Of the two teams, the Falcons looked to have adjusted to the occasion the better and Brazier soon had his second on the board. Lachlan Rewell then took a strong mark for the Falcons and duly converted to put the Falcons out to a 19-point advantage with the tackling pressure a real feature of the Joondalup-based side’s performance to that point. The Royals needed to respond quickly and did so through a terrific set shot goal by 16 year-old Kade Dittmar from 50 metres. The Falcons continued to take the ball inside 50, but were not able to further to their score, taking a 13-point lead into the first break. Powerfully built midfielder Tyron Hindmarsh was shaping as a key figure in this contest, having nine disposals in the first term.

The Royals started the second quarter well kicking their second goal in a row through Sebit Kuek. Undeterred, the Falcons steadied through the lively Brazier who took a strong mark and kicked his third for the game however he appeared to sustain a leg injury in the aftermath and left the ground for assessment. Todd was then able to take advantage of strong forward play from his teammates and finished from close range. The Falcons certainly had their opponents rattled, leading to some undisciplined play and a fifty metre penalty after a lively scuffle involving a number of players. Lachlan Scurria who had already taken a mark was the beneficiary of the aftermath and kicked the Falcons’ third of the term. East Perth was trying to find a way back into the contest, but that four goal buffer was proving tough to breach.

It was a professional first half performance by West Perth who completely dominated the use of the ball (169-85 in disposals) and (42-15 in marks). The shining light for the Royals was that even though they had minimal disposals, they were still taking the ball forward only trailing the Falcons by one in the inside 50 stakes (21-20). Key defender Heath Chapman was the leading player on the ground when it came to disposals amassing 16 along with six marks for the Falcons. Callum Johnson was tenacious with 15 and three tackles and Ewan Brazier was the best forward on the ground with three goals. Adam Boules was the only player to tally double figures for the Royals with 10.

The early stages of the third term would prove pivotal to the outcome of the contest but it was evident that the pressuring ability of the Falcons was a class apart from their opponents. This was exemplified by Todd’s tackle deep in the forward line which won him a free kick and he duly nailed his second major for the game. The ball movement of the Falcons was a sight to behold and they had East Perth at sixes and sevens. Goals to bottom-ager Jordan Berryand a third to Todd had all but moved them into a Preliminary final. The Royals were on the precipice and needed goals in a hurry. They got one from bottom ager Jaylen Colegate but after three goals in as many quarters, needed a minor miracle to keep their season alive.

If the Royals were wanting to conjure up something special in the final term, they needed a quick start and they got just that courtesy of a soccered goal to Harley Sparks. The Royals were looking as vibrant as they had been all day. Sparks was leading the charge and the midfielder kicked his second of the term narrowing the gap to 26 points with 14 minutes left. But it would take just one goal to end all hopes of a fairytale and Hindmarsh put the result beyond any doubt with a fine snap under pressure with Cooper Blackburn putting the icing on the cake soon after. Spider Lockitt kicked a late consolation, but the Falcons well and truly deserved their 33 point triumph. While some players will move up the playing divisions, there is enough talent coming through to keep them in the contending bracket.

West Perth had 130 more disposals than their opponents (340-210) and 51 more marks (93-42). Although they had less inside 50s, (41-39), they managed eight more scoring shots for the game which highlighted their efficiency throughout the contest. While the overall margin was convincing, it was the execution by foot which was a delight to observe and was certainly one of the more accomplished performances in the 2019 Colts season. While West Perth were defeated by Claremont last week, if they can re-produce this performance in seven days time against the Tigers, they will be very hard to beat.

Player of the game

There were plenty of contributors for the Falcons but the man who set the tone from the early stages was Koopah Todd. The midfielder has had many more prolific games in terms of disposals this season (17), but his all-round game was superb. The top-ager floated forward at will and was able to hit the scoreboard with three goals, along with five marks, six inside 50s and three tackles with couple of goal assists for good measure. If he can keep up that level of production in the weeks ahead, West Perth stand a good chance of winning the Colts premiership.

Todd had plenty of support with midfield companions Callum Johnson (30 disposals and seven tackles) and Tyron Hindmarsh (25 disposals, six tackles, four inside 50s and a goal) playing their role with aplomb. Heath Chapman was superb down back, reading the play terrifically well with 26 disposals, seven marks and six tackles. Kade Dittmar ran hard throughout for the Royals with 15 disposals and six inside 50s while Harley Sparkstried to lift his side late finishing with 22 disposals, four inside 50s and two goals.

Peel Thunder is the first team into the 2019 WAFL Colts Grand Final after a 34-point win against Claremont at Revo Fitness Stadium on Sunday morning.

A unique first quarter saw Peel kick six straight behinds, but remarkably managed to keep their opponents scoreless and led by that margin at quarter time. The inaccuracy continued in the second term, with a mixture of rushed behinds and missed shots at goal. The Tigers made the most of limited opportunities to stay in the game. Just before half-time, Connor Heuer was able to finally put the ball in between the big two sticks and break the drought. While Peel well and truly had the running of the game in a number of key areas, you wondered whether the old adage ‘bad kicking is bad football’ would come into play.

However the minor premiers were able to break the game open in the third term by kicking four goals to two with key forward Ben Middleton and classy small forward Tyrone Thorne kicking two each. They continued to be in the ascendency in the final term, kicking another three without reply and wrapping up a convincing victory.

Tyrone Thorne was exceptional with the state U18s representative having 25 disposals, seven tackles, six marks and three goals. Jarvis Pina was equally influential with the midfielder collecting 25 disposals and nine marks, while Bradley Oldfield produced his consummate performance with 21 disposals and nine tackles. For the Tigers who will now face the Falcons for the second time in a fortnight, it was Joel Western with 24 disposals, seven tackles and five inside 50s, while the blooming talents of Callum Jamieson were again on show with 18 disposals, six marks and 26 hit outs.