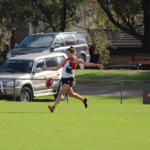 A SWITCH of ends helped Brooke Vernon find her role in the NAB League Girls competition, flourishing as a rebounding defender after spending her bottom-age year as a forward. Following in the footsteps of fellow Stingrays’ and local club Rye teammate, Jordyn Allen, Vernon is hoping her consistent year is enough to see her land on an AFL Women’s list in 2020.

“I started playing footy in Auskick when I was really young and I played my first season when I was 11 with the boys and then after that, at my local club Rye then brought in a girls team, so I played for them ever since,” Vernon said. “(It’s been) really good. “The support down there is great and I’ve also had friends from Rye who also played at Stingrays including Jordie Allen, so it’s been good. “It’s been so fun this year, it’s definitely the best year that I’ve had at the Stingrays. Performance wise and the friends I’ve made and experience I’ve had this year it’s been great.”

Vernon thanked the Stingrays for given her an opportunity in the new defensive role, one which saw her finish the year as arguably the competition’s most prolific rebounder, and earn Vic Country honours, something Vernon loved every moment of and wanted to keep moving forward.

“It (AFL Women’s Under-18 Championships) was so cool,” Vernon said. “Meeting a whole new bunch of girls on the Gold Coast and spending a whole week with them, it was amazing. “This is the first year I’ve played Vic Country, the level definitely changed from NAB League to those games, so I guess the level and the eliteness everyone needs to get to if they want to get to that level.”

Vernon rates her strengths as her decision making and ball use, while her athletic traits – endurance and speed – are among her areas of improvement for the future. But her improvement this year culminated in an AFL Women’s Draft Combine invitation, something she knows is important in the scheme of being drafted but had also prepared herself for missing out on an invite.

“I was really happy with it but I also wasn’t going to be too disappointed if I didn’t get an invite, because it’s not the be-all and end-all, but I was definitely happy that I did get noticed so it meant a lot,” Vernon said.

The Dandenong defender opted for Victoria Metro region, admitting that moving to Geelong during the season would be difficult, so she “played it safe” and chose the opportunity to play for one of the other seven Victorian clubs, including the Western Bulldogs, a side she has supported through both the men’s and then women’s competition, as well as supporting her friends who have joined the ranks. Now she hoped to join her biggest inspiration in the AFL Women’s next year by being selected in the AFL Women’s Draft later this month.

“I’ve had many inspirations,” Vernon said. “I couldn’t go past one of my good friends Jordie Allen, she’s such a hard worker and I always look to her for advice to work hard myself.”