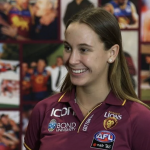 IN a unique series for the lead-up to the 2021 AFL Women’s season, Draft Central will look at 10 players who have played under 10 games to watch this year. Whilst it would be easy to pick those who finished high in last year’s Rising Star, or top picks this year, we have opted to look at players who have been around at least two seasons but have only managed to play nine games or less. We continue the countdown at number five with Brisbane’s Nat Grider.

The Lions’ young gun is the second Brisbane player in the list, following on from Jade Ellenger at number 10. Grider has played the maximum games to qualify for the 10 under 10, with nine matches in her two seasons. Playing off half-back and through the midfield, the 171cm prospect made her debut back in Round 4, 2019 against the Western Bulldogs after being selected with Pick 22 in the 2018 AFL Women’s National Draft.

Grider entered the league as an All-Australian representative and Queensland state captain. After two games in her debut season, Grider really stepped up in 2020, playing all seven matches and becoming a mainstay in a Lions outfit brimming with great young talent. She has quite the junior accolades having won the Rising Star Award and Team of the Year in the Queensland Australian Football League (QAFL) Women’s competition in 2018, and earned back-to-back Team of the Year honours the following season.

In her seven games, Grider averaged 8.1 disposals, 1.0 marks, 2.9 tackles and crucially, 4.9 intercept possessions. She became a crucial cog in the Lions’ back six, ranking second overall in that statistic behind All-Australian star full-back, Kate Lutkins. Grider’s impact was profound for her side, joining Lutkins and Emily Bates as her side’s top valued players, nominated for the 2020 AFL Women’s Players’ Association MVP Award.

While unlike many on the list that might have not had as many chances as they would have liked to-date, Grider has taken her chances but will look to go even further in 2021. Able to still make this list, expect Grider to be one of the first picked to start the new season, and provide plenty of run out of defence. She is a reliable player with natural leadership traits, and a special talent who will continue to improve.

The Lions might still be building towards something special as a young unit, but development is key and the likes of Grider will drive the next generation as they look to go one better than their efforts in 2017 and 2018. 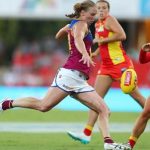 In this edition, we look at number 12 in our count, a reliable key defender who has become one of the elite players in the competition over the past couple of years.

The Brisbane Lions key defender comes in at number 12 on our count with Lutkins named at full-back in the 2020 AFL Women’s All-Australian team. Having played for the full four seasons now, Lutkins has earned two All-Australian honours having achieved the feat back in 2018. That year, Lutkins also won the Brisbane best and fairest.

In 2020, Lutkins averaged a career-high 4.4 marks per game, and while her disposals were marginally down, her defensive attributes such as her tackling and rebounding remained consistent. Turning 32 at the end of the month, Lutkins has showed with her performances this year that she has plenty of quality football left in her.

Aside from her six-touch game against the Cats, Lutkins averaged 14.5 disposals, with a 21-disposal (20-kick) effort against the Gold Coast Suns in Round 3 being the highlight game of her 2020 season. She also took a whopping 12 marks in that drawn match, as well as recorded three inside 50s, four rebounds and two tackles.

What makes Lutkins so impressive is her reliability and strength in the air which she has been able to pass on to younger teammates in a year when there was plenty of changes at the Lions. Outside of the elite level, Lutkins has been a leader at Wilston Grange and spearheaded the success at the club with a premiership in 2018.

With Lutkins expected to continue her success at the Lions in 2020 as vice-captain to Emma Zielke once again, the fearless defender will no doubt find her way into the top 20 players in the competition. Often a measuring stick of the Lions’ success, Lutkins is one player any coach can rely upon to get the job done each and every week. 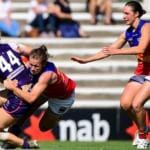 ANOTHER heavy list turnover did little to stop Brisbane from making finals for the third time in four AFL Women’s seasons, getting back to a positive record (3-2-1) in a campaign which began so brightly. A real surprise packet of this year’s competition, the Lions topped Conference A after four rounds before a string of losses ended their astonishing run upon the first (and only) week of finals. With a core of hardened leaders and some quickly developing recruits to boot, the Lions were a fun side to watch in 2020. Relive the highs and lows of Brisbane’s season in our review, and take a look back at some of the most outstanding players throughout.

Little was expected from the Lions according to those outside of the Den, but they certainly delivered one of the more memorable opening months to the season on record. First on the agenda was the task of knocking off reigning premier, Adelaide, which was passed with flying colours. Next came Geelong, tick, and a maiden Q-Clash against Gold Coast which produced a thrilling draw. Arguably the most impressive victory was Brisbane’s last – a 28-point dismantling of fellow finalist GWS – which set up a mouthwatering clash against Fremantle, the other Conference leader and undefeated side. After the Dockers found the Lions out, so did Collingwood and Carlton in a less buoyant end to the year.

SEASON HIGH: Going nowhere – knocking off the Crows in Round 1

For the third time, not many expected Brisbane to prove much competition to the likes of Adelaide, but how wrong they were. The Lions’ defence stood strong in this one, holding the Crows goalless in two of the four quarters, with more clear-cut opportunities created up the other end. In this impressive triumph, the Lions gave fans a glimpse of what to expect in terms of effort and tackling pressure, proving their hunger for the contest and that indeed, they were going nowhere.

SEASON LOW: Running out of legs – finishing with three-straight losses

It may be a little harsh to throw three very different losses into a mix of one, but each consecutive defeats to see out the season put a slight dampener on it overall. While they were exceeding pre-season expectations, the Lions were billed to really match it with the likes of Fremantle, but instead were jumped from the get-go and could not claw their way back. Three goalless quarters against Collingwood came the next week, with Carlton outlasting the Lions come finals time.

The Brisbane veteran is arguably her side’s most valuable player, and was effective as ever in her customary centre half-back role this season. As the core of the Lions’ usually rock-solid defence, Lutkins was influential going both ways in leading her club in intercept possessions, marks, and rebound 50s. The 31-year-old’s reading of the play is second to none, and was a key part of Brisbane’s success in 2020.

Once a prized draft pick with high potential, Bates made the transition this year into Brisbane’s prime midfielder in what was nothing short of an outstanding campaign. The 169cm jet topped the Lions’ charts in disposals, metres gained, and clearances, showcasing her undeniable impact from the contest. Much of Brisbane’s forward drive began through the likes of Bates, as her star continues to rise with All Australian squad recognition.

While she looked to have battled through injury toward the back-half of the season, Conway proved she is tough as nails with her approach to the game. Utilised mostly as a half-forward, Conway was often the link in the chain between forward wing and the forward 50 arc – finishing as the clubhouse leader for inside 50s while also booting three goals herself. There is plenty of potential in the 21-year-old, who could well transition to a greater midfield role.

Another of the foundation Lions who just continues to perform at the highest level, Anderson was once again a mainstay in her side’s engine room across all seven games. The midfielder’s work rate was admirable as always, allowing her to find the ball both at the coalface and then on the spread at a good rate. With the midfield brigade to support her now developing well, Anderson’s experience is becoming increasingly important.

The effects of a lightning strike may have limited the star forward’s season to five outings, but it did not stop Wuetschner from having an impact. A goal tally of three is low by her lofty standards, however the 27-year-old inaugural Lion enjoyed a slightly different role in 2020 as she led up the ground more and helped to link the play coming into Brisbane’s forward 50. A classy user with sticky hands, the goalsneak found the big sticks at important times, but to no avail in two losses.

The premier women’s competition has been crying out for a truly dominant key forward since its inception, and Wardlaw put her hat into the ring along with a few other youngsters to fill that void in 2020. The dynamic 185cm tall was held goalless just once across seven games, and led the league for goals for a good chunk of the season. While she was eventually overtaken, the high-marking Lion’s haul of nine went a long way to proving her potential.

The 28-year-old became one of the league’s best mature-age draftee success stories in 2020, providing terrific drive for the Lions from defence and midfield. After debuting as a half-back, Svarc transitioned into a stoppage-splitting midfielder who doubled as a run-with player – best epitomised in her game against GWS where she had 23 disposals and two goals while keeping tabs on Alyce Parker. A true metre-gained player, Svarc was eye-catching in full flight with great aggression and speed.

The ‘foundation eight’ carried a much of the responsibility in ensuring Brisbane could keep up with the competition’s best, and while they ultimately fell short of the league’s benchmark, the Lions have plenty of stock to suggest they can build on a promising year. With a strong core and strong academy system to top it up each year, this side can only get better.