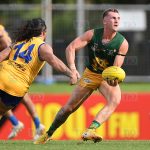 THE FINAL Northern Territory Football League (NTFL) Men’s Premier League home-and-away round was run and done on Saturday, with finals fixtures officially locked in. A mixed bag of results saw top two sides Nightcliff and St Mary’s earn terrific wins on postseason’s eve, while Southern Districts upset Darwin in a thriller and Palmerston sent off a club stalwart coach in style. All that, and more in our Round 18 weekend wrap.

Palmerston ensured Tiwi would complete a winless season in 2020/21, handing the Bombers their 18th loss for the season on Saturday by 67 points. The undermanned Bombers competed well early despite desperately scrounging to fill the team sheet with 18 players, but were blown out in the second term as Palmerston slammed home 10 goals. The Magpies’ scoring surge set up their 18.17 (125) to 9.4 (58) win, ensuring player-coach Alwyn Davey would be sent off fittingly in his final game at the helm.

Davey booted the last goal of the game and was served well by Aiden McAdam inside 50, who booted a game-high six goals. Chris Williams was prolific through midfield and added four majors, as a total of eight Magpies joined in on the scoring action. Formerly retired Bomber Simon Munkara was strong early and finished with three goals, while Austin Wonaeamirri snared two and skipper Paddy Heenan worked hard for his side through the engine room.

Southern Districts may have fallen short of finals this season, but capped off its 2020/21 campaign with a spirited one-point win over Darwin Buffaloes on Saturday. The Crocs led throughout the scrappy contest and played like a side which had nothing to lose, building a two-goal buffer and holding on at the clutch. Timothy Eldridge booted the only fourth term major as Darwin closed to within a goal, but could not overturn the result which ended 7.4 (46) to 6.9 (45) in favour of Districts.

Along with Eldridge, spearhead Brodie Foster helped cut the margin for Darwin at key moments and finished with a game-high three goals. He was impactful alongside the likes of Kelvin Williams and Bradley Stokes. Former AFL ruckman Zac Clarke made his debut for the Crocs, hitting the scoreboard and adding to their tall stocks. Dean Robertson booted two majors as one of Districts’ best, along with fellow goal getters Luke Kiel and Michael Bowden.

Saturday’s qualifying final preview saw St Mary’s blow Wanderers away by 79 points, seeing the Saints cement second spot and a handy mental edge ahead of the postseason. The second and third terms proved telling periods for the winners, who added 10 goals to Wanderers’ two through a wealth of opportunities to lay the foundations for their comprehensive 19.17 (131) to 8.4 (52) triumph.

Jack Landt (three goals) led a brigade of 12 individual goalkickers for the Saints, with brother Dylan one of five players to claim two majors. Brandyn Grenfell was another as he took over primary ruck duties, while Lucas Jellyman-Turner also impressed for the Green Machine. Competition leading goalkicker Brett Eddy capped off his season with another five majors, supplied well by Dane McFarlane in midfield, who was on of Wanderers’ best along with Aaron and Brenton Motlop.

Nightcliff overturned a 34-point half time deficit in muddy conditions on Saturday night to defeat Waratah by two points in a thrilling Battle of the Beaches. The Tigers were stunned by a seven-goal second term from Waratah, but quickly cut back to a manageable deficit at the next break before sneaking ahead to take all four points. The 9.10 (64) to 10.2 (62) result means Nightcliff has now won eight-straight games as it guns for a premiership three-peat.

Usual suspects were at the core of the Tigers’ turnaround, with midfield maestros Brodie Filo and Dom Brew performing well while Shaun Wilson (three goals) and Trent Melville (two) benefitted inside attacking 50. Robert Turnbull also booted three majors for Waratah as the Warriors’ best player afield, with fellow scorers Damon Hemphill and Will Collis also among their side’s best contributors in the losing effort.