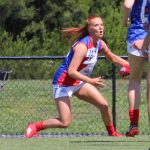 GIPPSLAND Power prospect Shanara Notman is somewhat of a coach’s dream; versatile, raw, hard-working, and made of leadership material. The 19-year-old narrowly missed out on being drafted last year, and had pegged her 2020 campaign as one which would help garner the experience and game sense required to make the step-up to an AFL Women’s list.

Setbacks have come thick and fast for Notman and her fellow draft hopefuls in a rollercoaster year, but the talented tall has formed a habit of making good on each opportunity to arise across her young footballing career.

She hyperextended her knee five minutes into last year’s NAB League season, but recovered in time to warrant selection in the Vic Country Under 18 squad. It was during the weeklong carnival in Queensland where Notman thrust her name into draft contention, swinging up forward and even through the ruck after cutting her teeth off half-back for Gippsland.

Being overlooked from those dizzying heights would have put many AFLW hopefuls on the back foot, but not Notman.

“Straight after the draft I quickly contacted Chelsea Caple, our talent manager at (Gippsland) Power,” Notman said. “Less than an hour after the draft, my permit for the 2020 season had been approved for Power, so I was going to go in as a 19-year-old. We had an awesome preseason this year and I put in so much effort to get there.”

The effort looked to be paying off, as Notman, with VFLW and representative experience under her belt, returned a couple of outstanding performances at the start of this year’s NAB League competition. But with that season, along with every other league across Victoria written off in due course, Notman found herself facing yet another hurdle.

“We got two games in this year, we had an awesome camp run by our coach, Scotty (Armour)… but since the news about not playing anymore, then hopefully playing later in the year, which obviously got cancelled too, it’s been a bit heartbreaking,” she said.

Notman is a talented multi-sport athlete, though the art of hurdling has become more of a mental battle in such “chaotic” times.

“To stay motivated, it’s been full of ups and down this year,” she said. “I’ve been fully committed to going to the gym or going for a kick with a few mates who are local and play VFL with us (in line with COVID-19 lockdown regulations of the time). “But it’s an incredibly difficult time, especially because you’ve got to rely on yourself, not your teammates and coaching staff to keep you motivated.”

With lockdown restrictions eased in regional Victoria in mid-September, Notman says she “can’t wait” to get back to some form of normality and group training as soon as possible.

“I find it easier to train with a group of girls than to train by myself, it just keeps you more motivated,” she said. “I’m lucky enough to have one of my best mates, Breanna Pratt, she plays with me at VFL and she lives really close-by so I can go for a kick with her. I’ve got a home gym set up just to keep fit, too.”

“I’m a really social person… I always chat to the Power girls, just helping out the younger ones. “I’m looking forward even in the future to going back down to Power, helping out there and doing whatever I can to help the girls out.”

As the second-eldest member of Gippsland Power’s current squad, Notman has naturally become a leader among the group – despite only featuring in the elite footballing pathway for two years. Having leant on the likes of Daisy Pearce and Gippsland Power graduate, Tyla Hanks during her time at the Casey Demons, the youngster was especially driven to set an example at the start of her over-age NAB League campaign. Earning the vice-captain tag only made it official.

“I was lucky enough to be named the vice-captain of Power this year alongside Grace McRae, who was our captain,” she said. “I was really putting in with that leadership role as I was (one of) the oldest girls on the team – me and Leyla Berry were the over-agers. I was putting in the effort to lead the girls because we’ve got some 15-year-olds and a pretty young group. It was a really exciting time.”

“Girls like Tyla Hanks from the Power, she’s awesome… I trained with the Melbourne girls at the start of the year, with Daisy Pearce and that. They’re great leaders and they help all the NAB League girls come through. They’re just amazing.”

Given Casey’s ties to Melbourne’s AFLW side, Notman has jumped on the Demons’ bandwagon in support of her VFLW teammates, as her beloved Hawthorn does not yet lay claim to a women’s team. But it’s not just players who have mentored Notman throughout her path less travelled by, as the aforementioned Caple, Armour, and former Gippsland Power stalwart, Peter Francis have also played big roles in seeing her through to this point.

“I’m always in contact with Chelsea Caple and Scotty Armour,” she said. “They’re really good mentors for me, they’ve always been there for the last two years and they’ve really encouraged me to be my best… staff like Peter Francis really helped me get into footy, he was a big help at (Gippsland) Power.”

“At Casey I’ve got our assistant coach Troy Hemming, he’s from Warragul so I’m always giving him a call to go for a kick here and there and just catch up.”

As for the ideal path forward, Notman is looking to harness her versatility and play as high a level of football as possible. There lies somewhat of a Plan B as well, as the 19-year-old plies her trade full-time as a support trainee at Drouin Secondary College in the PE and sport and recreation realms.

“The ideal path will obviously be to start playing footy again next year. But my overall goal will be to one day just play footy at the highest level possible and just enjoy footy,” she said.

“I feel like my best position would be running off half-back. Especially at the Power this year, that really benefitted me… (but) it’s really exciting to be versatile and just play wherever the coach wants you to play.”

“If the draft doesn’t go as I hope this year, hopefully VFL actually goes ahead next year and I’ll just keep playing at Casey because I’m really enjoying that.”

At the time of writing, the 2020 AFLW combine testing and All-Stars game in Victoria were cancelled, leaving the October 6 draft as Notman’s next major point of call.