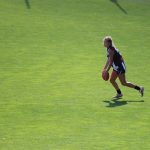 REGULARLY getting fouled out in basketball told Amelia Van Oosterwijck that perhaps she needed a change of sporting scenery. While the tenacious runner enjoyed watching Australian rules football on the television, she never thought she would involve herself to the point that she would run out representing her state at the 2019 AFL Women’s Under-18 Championships.

“My dad was always a massive Collingwood fan and I loved watching it growing up,” Van Oosterwijck said. “Then I started playing basketball and a teammate of mine – she plays footy and I kept getting fouled out all the time – was like ‘why don’t you try footy it’s a bit more physical?’ “So tried that out and ended up loving the game.”

Of the differences between the sports, it was certainly the physicality that stood out to Van Oosterwijck.

“It’s a lot more physical,” she said. “So I love that, I love tackling, I love just the nature of the game. “It’s so much faster than basketball in my opinion.”

That physical style of play is what has become a feature of the small forward’s game, laying more than five tackles per game for Oakleigh Chargers in the NAB League Girls competition this year. Her defensive pressure, coupled with her ability to hit the scoreboard – she booted four goals from nine games but spent time up the ground as well to produce more than two inside 50s per game. Van Oosterwijck said the camaraderie at the Chargers was something she loved.

“I love being around the girls,” she said. “The group of girls you play with are lifelong friends, they are all there for you and they all support you no matter if you stuff up or you kick a goal, they’ll always be there and I love that part of it.”

Her form was enough to see her represent Vic Metro at the championships where she played two games – she missed one due to a late withdrawal – and still showed her defensive intent with three tackles per match and a goal on the Gold Coast as well. Speaking at the NAB League Fitness Testing Day hosted by Rookie Me in March, Van Oosterwijck said her goal for 2019 was to build her core strength.

“For me personally, I want to get a bit stronger around the hips because I am a shorter player and I do get knocked over by the bigger girls so by improving my strength I’ll be able to withstand those tackles,” she said.

The increased standards were noticeable from early in the pre-season for Van Oosterwijck who said everyone had lifted making it a real challenge in the off-season.

“The standards have got so much higher,” she said. “The physicality, the running side of it, everyone’s got a lot quicker. “It’s a big step up and I think I enjoy the game way more than I did last season.”