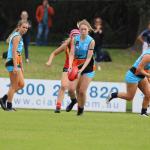 GREATER Western Sydney (GWS) GIANTS Academy member Jess Whelan doesn’t have to look far for inspiration as she powers through her footballing journey. In the same charcoal and orange colours she donned this year during a one-game NAB League Girls stint, a top-flight gem has already paved a path worth following.

That gem is Haneen Zreika, a zippy GIANTS midfielder whose journey to the AFLW skipped through a couple of codes – much like Whelan is currently emulating.

“(Zreika) is an inspiration,” Whelan said. “Probably because she played Rugby League and AFL as well, which is similar to me.”

The 18-year-old says “positional play” and “tackling” are just a couple of the skills she has transferred from one sport to the other, making the transition that bit easier. For a prospect who only started out in Australian football “a few years ago”, she has made significant strides throughout the pathway – representing the Eastern Allies thrice in 2019, before turning out for the Allies this year.

“I played a year and then got picked to play (NSW-ACT) Rams,” she said. “I did that and then got into the Eastern Allies squad that year as well, then Covid hit the next year and now I’m with the Allies.”

In a slightly different mix to Whelan’s Eastern Allies experience, the 2021 Allies squad was comprised of players from NSW-ACT, Tasmania, and the Northern Territory. Whelan was one of eight GIANTS Academy members to be included in the 24-player squad.

“(The Allies experience) has been pretty good,” she said. “I’m getting along with a lot of the Tassie girls and it’s good just to meet people across Australia and see their different ways and how their footy’s going.”

Whelan, a 175cm winger also collected 15 disposals, four marks, four inside 50s and a goal as the GIANTS Academy defeated Murray Bushrangers in Round 6 of this year’s NAB League Girls competition. She was able to showcase a couple of her core strengths in that outing, with the key ones she identified being kicking and her running capacity on the wing.

While kicking on one foot is a strength, Whelan is working on becoming a more dual-sided player as she makes her left-sided kicking “more precise.”

As far as her footballing goals go, the youngster is keeping them relatively simple. Having come so far already in a short span of time, she says the end goal is to “try and get as far as (she) can.”