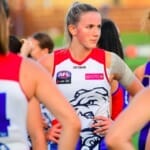 ROUND 4 of the 2020 AFL Women’s saw a number of young guns shine, with top-end first year draftees continuing to come into their own among a raft of 2000 and 2001-born prospects at the top level. The 2019 number one and 13 picks each earned Rising Star nominations, showcasing the true depth of talent in the next generation of future stars.

The Dees got up impressively in this one on the back of superior experience and depth, but Collingwood’s developing list has shown some noted signs of improvement in 2020 coming off a wooden spoon season. Tyla Hanks has, for the most part, been Melbourne’s sole under-21 representative thus far, and continued her solid form in the forward rotation with 15 disposals and five tackles. The Magpies’ youngsters were a touch quieter, but Mikala Cann was the pick of the bunch with 12 disposals, two marks and four tackles, while Alana Porter (11 disposals), Jordyn Allen (nine disposals, two marks), and Lauren Butler (eight disposals, five tackles) were also serviceable. With key defender Ash Brazill going down with an ACL injury on the weekend, the strong list of developing Pies will need to stand up in the back-end of the season.

An extra year in the system is the key difference between much of Geelong and Richmond’s teenage crops, and 2018 draftee Olivia Purcell proved the prime example of that theory with her leading hand in the Cats’ high-scoring win over the Tigers in Bendigo. Purcell gathered a team-high 20 disposals and booted a goal, while fellow class of 2018 graduate Georgia Clarke was effective close to goal with two majors from eight disposals. The Cats’ first 2018 pick, Nina Morrison continues to play into form and collected 12 touches in more of a forward role, with Rebecca Webster (eight disposals, six tackles) a touch down on her own much-improved form but still influential. Sophie Molan led a handful of first-year Tigers with her 10-disposal effort, while Kodi Jacques and Laura McClelland also held their own with a goal each. Former Northern Knights pair Maddy Brancatisano and Sarah Sansonetti had five touches each, but struggled to have the impact required to get Richmond over the line.

A winning debut for Tasmanian draftee, Mia King headlined a solid game for a bunch of quality prospects as the Kangaroos trumped Gold Coast at Arden Street. King collected 11 disposals and two marks while laying three tackles in a steady display of her talent, while 2018 draftee Daisy Bateman notched her second two-goal tally for the season, booting majors at crucial times to keep the SUNS at bay. For Gold Coast, Jacqui Yorston was terrific with 15 disposals, five marks and six tackles, leading a talented handful of 2000/2001-born SUNS guns. Fellow former-Lion Lauren Bella continued her rise in the ruck with 10 touches and three marks, while academy products Ellie Hampson and Serene Watson each claimed eight touches in roles at opposite ends. The exuberant SUNS have been a surprise packet this season, with their hunger for the contest helping them hang with the best of sides, and that will put them in good stead going forward in accelerating their growth.

West Coast’s maiden AFL Women’s victory may have been the main takeaway from this fixture for neutrals, but those on the Dogs’ side will be thrilled by the game of 2019 number one draft pick, Gabby Newton. The Northern Knights graduate gathered 16 touches, five marks and laid 10 tackles – all season-high numbers – to earn a Rising Star nomination, while fellow class of 2019 alumni Gemma Lagioia (12 disposals, three marks) and Elisabeth Georgostathis shone at either end, and debutant Hannah Munyard found the ball eight times. Second year player Eleanor Brown also put up her clear-best numbers for the year with 12 disposals and five marks on the outside, with plenty to work on for the former top-10 pick. Mikayla Bowen was the standout Under-20 Eagle, notching 11 disposals and laying six tackles, with prized tall recruit McKenzie Dowrick returning a steady three touches while Sophie McDonald managed nine – a season-high for her.

The other Rising Star nomination came out of a monumental Blues’ win, with physical 19-year-old midfielder Grace Egan being rewarded for a strong string of performances. The Murray Bushrangers and Richmond VFL product managed her second 18-disposal game for the season, adding six marks and four tackles to the effort. 2019 Rising Star Madison Prespakis went about her usual business with a team-high 20 disposals and one goal, while Round 1 nominee Lucy McEvoy had it 14 times to go with seven tackles, and Charlotte Wilson enjoyed a breakout game of 19 disposals and nine marks after missing last week. For the depleted Crows, Danielle Ponter failed to find the big sticks after a four-goal effort in Round 3, kept to a season-low of six disposals. Fellow forward Nikki Gore stayed true to her seasonal form with eight disposals and three tackles, but was also kept out of the scoreboard as Carlton’s defence stood firm.

A strange and undeniably tense contest between St Kilda and Fremantle saw pre-listed Dandenong Stingrays graduate Molly McDonald play a massive part in the outcome of the game, while a host of other first and second year players had promising cameos. St Kilda looked arguably the better side and like being the eventual winner when McDonald snapped through a wonderful goal in the last term, but a costly 50-metre penalty against the 2019 draftee cruelly gifted Fremantle a chance to stay in the game. Prized pick Georgia Patrikios (11 disposals, two marks) was down on her disposal output but still strong, while Nicola Xenos‘ pace and repeat efforts proved menacing, but the promising signs in a tight loss were somewhat soured by a serious knee injury to 19-year-old Tarni White, who immediately knew of the severity. Fremantle’s generational tall prospects were a touch quieter, with Mim Strom and Roxanne Roux having a combined 11 disposals, while Sabreena Duffy had seven touches and two behinds and Emma O’Driscoll (six disposals, two marks) enjoyed a steady first game for the season.

Brisbane’s young guns enjoyed some success in front of goal in their big win over GWS, led by exciting key forward Jesse Wardlaw. The 185cm tall booted two goals from 10 disposals and five marks, showcasing her sticky hands, fluent set shot routine, and love for a celebration. Prized 2019 draftee Lily Postlethwaite (11 disposals, five marks) also snapped home her first ever AFLW goal to cap off another solid outing, with Natalie Grider (11 disposals, three tackles) also coming on well. On the other hand, GWS’ young talent is a touch more sparse, but the GIANTS have an out-and-out gun in Alyce Parker. The Lions knew that coming in too, and had mature-age draftee Catherine Svarc put a physical tag on the 19-year-old to quell her midfield output. Still, Parker managed to collect 11 disposals and lay three tackles, while also hitting up Yvonne Bonner late on to assist one of the GIANTS’ three goals.