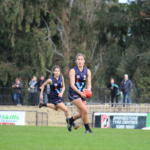 THE 2020 AFL Women’s Academy was announced yesterday, with Victoria metropolitan regions continuing their dominance in contributing to the nation’s high-end talent pool in the biggest intake yet. As is the standard, the Academy is split into Level 1 (Under-17) and Level 2 (Under-18) squads, with each state and territory having at least one representative across the 52 players chosen.

Northern Knights’ undefeated premiership season has translated to contributing four of the 12 Vic Metro members, with early first pick contender Ellie McKenzie leading the pack. Sandringham had two products picked, while Eastern and Oakleigh had two each and Isabelle Pritchard was the lone Western Jet to get a nod. Eight Vic Country representatives also made the squad, with a trio of Greater Western Victoria (GWV) Rebels leading the line from a Geelong Falcons pairing and single selections from Dandenong, Murray and Gippsland.

Academy members will all have the chance to train with AFLW clubs across December and January, while also attending high performance training camps in January, April, and August.