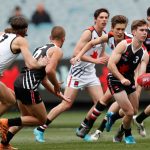 WITH news that Western Australia will take on South Australia in an epic Under 19-themed AFL Grand Final curtain-raiser event, we take a look back at the last time budding AFL Draft prospects took the field ahead of their future counterparts, in 2019. The annual Under 17 Futures All Star clash has been scrapped for the last two years due to Covid restrictions, but proved a valuable sighter for the 2020 crop.

46 of the nation’s best talents got together to form Team Brown (black) and Team Dal Santo (white), battling it out on the big stage in what ended up being a very rare occasion for last year’s draft class, given it was ridded of an Under 18 National Championship and plenty of regular season football.

Of the 46 players afield, 36 have since been drafted with 22 making their AFL debuts this season. Among them was Sydney Swans Academy graduate Braeden Campbell, who shot into top 10 consideration with a best afield performance for Team Brown, who ran out 47-point winners.

A teammate of Campbell’s on the day, Jake Bowey also showcased his class with quick and clean skills, and will likely line up for Melbourne in this year’s AFL decider – bringing his journey full circle. Also available for selection in the big dance is Jamarra Ugle-Hagan, who featured for Team Brown and was last year’s number one pick.

Eight of 2020’s top 10 draftees took the field, and it would have been a perfect record had Denver Grainger-Barras and Nik Cox been available. The earliest pick to miss selection was Luke Pedlar, who was snapped up by Adelaide with pick 11. A range of first round bolters also missed, including 2021 debutants Tom Powell, Conor Stone, Max Holmes, and Brayden Cook.

While the showcase nature of the game makes for required viewing for most keen draft watchers, fans would also have taken a keen interest given the whopping 18 club-tied players who were selected. It was no secret from even that early stage that the 2020 draft would be heavily compromised, and that figure only proved as much.

Nine Northern Academy talents took the field, with Campbell and his Swans Academy teammate Errol Gulden the standouts. Of the seven-man Next Generation Academy crew, Ugle-Hagan, Lachlan Jones (Port Adelaide), and Reef McInnes (Collingwood) were all selected in the first round, while Taj Schofield landed at Port as a father-son candidate. Luke Edwards also fell under father-son eligibility, but was taken by West Coast in the open draft after Adelaide passed on nominating him.

While there were plenty of eventual draftees who missed out on selection in this game, but later proved their worth, the Futures fixture has long been an important one in identifying the next generation of talent. In 2019, it proved particularly essential given the class of 2020 endured a heavily interrupted season and limited opportunities to shine on the big stage.

This year, with another clash between WA and SA, there looms another critical opportunity for budding prospects to stake their claims as genuine contenders under a grand spotlight. There will inevitably be a riser, a surprise packet, one who stamps his first round credentials. We’ll find out who on September 25.