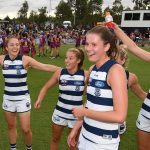 IN a unique series for the lead-up to the 2021 AFL Women’s season, Draft Central will look at 10 players who have played under 10 games to watch this year. Whilst it would be easy to pick those who finished high in last year’s Rising Star, or top picks this year, we have opted to look at players who have been around at least two seasons but have only managed to play nine games or less. We continue the countdown at number six with Geelong’s Rene Caris.

The Cats’ ruck has played four games in two seasons, being a member of the foundation squad in 2019, having been picked up with selection 35 in the 2018 AFL Women’s National Draft. The 184cm tall – who has now been joined at the elite level by her sister Maggie – made her debut in Round 5 of the 2019 season and played one additional game in that year, before doubling her career games tally with another two games in 2020.

Playing alongside experienced ruck Aasta O’Connor – who oversaw Caris’ development through the AFL Women’s Academy – the former Greater Western Victoria (GWV) Rebels’ talent is expected to make great strides in 2021 and spend more minutes through the ruck, and gradually transition into the role full-time over the coming seasons as the 33-year-old O’Connor rounds out a decorated career.

Whilst Caris is far from alone in terms of talent that has played under 10 games for the Cats, the ruck has an obvious opportunity and role that could be filled, learning from the best when it comes to youth development. O’Connor has overseen plenty of star youngsters coming through the pathway, and to get additional one-on-one coaching at the elite level will only make the 21-year-old all the more ready to have a long-term impact on the game.

Whilst Caris will turn 22 during the season – having been 19 when she was selected in 2018 – rucks always take longer to develop when taking on bigger bodies. As has been the case in her family with sister Maggie, Caris is equally talented at netball, but is firmly focused on the oblong ball game.

Despite only playing the two games last season, Caris averaged 11.5 hitouts to go with 2.5 rebounds and 5.0 disposals, showing an innate ability to run both ways and get back into defence to help out. Half of her disposals were rebounds, and with two-way running such an important trait for rucks, Caris has plenty of potential to go a long way. When she can begin hitting the scoreboard regularly playing a permanent role in the side, she will be a dual threat.