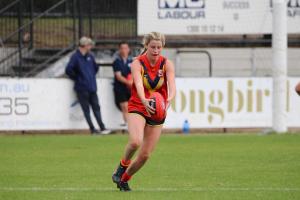 Zoe Venning is a hard-nosed versatile mid/forward who thrives on the contested ball and is able to run all day long to outlast her opponents and rack up plenty of the footy.

Zoe Venning is a contested-ball winning midfielder who not only thrives around the coal face, but also inside 50 where she provides great pressure on opponents. She has a real balance of endurance and athleticism, describing herself as not elite in any one area, but just above average across the board, which makes her able to use her mix of speed and endurance to wear down opponents.

Venning has no issues collecting the ball at will and laying some huge tackles, averaging 23 touches and 6.7 tackles – as well as four clearances – per game at the AFL Women’s Under 19 Championships. She kicked an important goal late against the Allies in South Australia’s final game, and has proven that she can hit the scoreboard as well as find the ball anywhere on the ground.

With an insatiable appetite to win the ball and spread well, Venning seems to be able to cover the ground like few others, and whilst her execution has improved over the past couple of years, that is an area she is looking to continue to build on. From an inside perspective, her game is very well suited to the style of play, and she loves a slog fest where she can go to work in close.

Up forward, not a huge overhead mark, Venning can still gain separation on her opponent and hit the scoreboard, but she also wins a lot of free kicks for getting to the ball first – as well as giving away some for her aggressive tackling and refusal to lose a one-on-one contest.

Looking forward, Venning seems like a player who will be able to step up at the next level once she has ironed out a few things, but is one who is destined for big things be it this year or in the coming years with the growth of AFL Women’s.

“I really back myself. I don’t really get intimidated by who I’m (against). I control if I’m going to get the ball or not, I’m not an outside receiver. I also think my marking’s quite strong. As a midfielder I can take a strong mark and be a link-up player, even on the kick-outs. “It’s (national championships) been a really good achievement and I’m really excited just to show people what I’ve got,” she said. “I’m looking at it as an opportunity for me and the team to really utilise the talent we have in SA because it’s our standalone year. I’m just looking forward to showing my teamwork with others and it’s not just me, I want everyone to do well. But I still want to show that I am a strong player and I’m here to get drafted.” – Zoe Venning via “Competitive Venning used to putting in the “extra effort”

“Another State Academy member who put together a better season than her last earned a Breakthrough Player nomination and averaged 16.5 disposals, 2.3 marks, 4.7 tackles, 2.1 clearances, 2.8 inside 50s and 1.2 rebound 50s per game. Predominantly playing inside midfield and then later on as a high half-forward, Venning brought the pressure and work rate that saw her really standout for the Bloods. Receiving an AFLW Draft Combine invite and earning a sport at half-forward in the SANFL Women’s Team of the Year, Venning had a really impressive season.” – Peter Williams via “2021 SANFLW team review: West Adelaide”

“In many ways was symbolic of West Adelaide as a whole. Had a huge first half with good intent and was one of the Bloods’ most prominent ball winners early, before a quiet third term which followed a busy fourth quarter. As a whole Venning kept having a crack, often under pressure or rushed, but really applied fierce defensive pressure, won some free kicks and was able to get her hands free on a couple of occasions. She did drop a couple of marks she should have taken, but her second efforts were admirable, and she laid some fierce tackles all over the ground, covering the field with ease.” – – Peter Williams via “2021 Academy Watch: SANFL Women’s Grand Final”