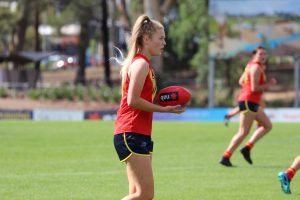 Zoe Prowse has been a prominent name in the South Australian footballing pathway for some years now, developing as an ultimate utility after dominating as an athletic ruck. She is clean with her hitouts, able to get down and impact through her tackling, and accumulates possessions around the ground in transition as a strong mark.

As an overall draft prospect, Prowse ticks a lot of boxes. not only is she the standout ruck in the 2021 draft crop, but she has been able to adapt to multiple positions in 2021. As has been proven through the likes of star ruck Montana McKinnon at the Crows – who followed the same pathway as Prowse through the AFLW Academy – it is hard to squeeze into Adelaide’s AFLW outfit, so being able to play as a forward or even a midfielder helps Prowse fast-track her development. She is a player who has had to learn quickly starting as the ruck from day dot in the SANFL Women’s program at Sturt, but has hardly put a foot wrong.

By her own admission, Prowse’s main improvement is her kicking, which whilst not terrible, is inconsistent, which is why the tall identifies it as an area of improvement. In terms of her ability to win the ball, Prowse can win it in the air, or at ground level, applying fierce defensive pressure to opponents and not letting smaller opponents get away. In the penultimate round of the season, Prowse was injured early in the match which impacted her overall averages, but otherwise had not won below nine touches a game, and laid a tackle – often our or more – in every other game.

Prowse has been open about her desire to land at the Crows, and much like McKinnon and Teah Charlton before her, the ruck is one of the safest names to expect to be read out in the South Australian pool. The only question will be where she plays at AFLW level, capable of fulfilling multiple roles across the field.

“It’s been a lot, so I started when I was 15 and I was thrown into the ruck pretty much straight away so I was pretty young, but it was exciting and I learnt a lot very quickly,” – Zoe Prowse via “Prowse excels from being thrown into key role”

“My goal for the year is to get drafted, I want to be drafted by the Crows,” – Zoe Prowse via “Prowse set for a positional change in 2021”

“Spent less time as a ruck with Sturt this season and worked on midfield craft, although played as a ruck in the South Australian U19 team in the AFLW U19 Championships. Excellent mark and highly competitive.” – Robbie Neill, South Australian Female Programs Talent Manager

“Her athleticism around the ground is superb, and she can find the football as well as any midfielder which makes her one of the more readymade rucks coming through junior programs. Prowse’s vertical leap is massive, but she can also get her hands dirty, laying plenty of tackles and causing a real nuisance at ground level,” – Peter Williams via “AFLW Draft Positional Analysis: Rucks”

“Another fantastic performance from the talented utility who continues to adapt to wherever the team needs her. Sharing ruck duties with Jess Good, Prowse was excellent whenever she was required to take hit outs, finishing with 14 for the day as a back-up. She also displayed her excellent ability to find the ball and use it with class. She ended the day with 14 disposals and a whopping seven inside 50’s. Her five tackles demonstrated her willingness to do the dirty work in the contest and finished the day as one of her side’s best.” – Liam Badkin via “2021 Academy Watch: SANFLW – Round 9”

“Was everywhere in the first half, particularly first term as she made her mark around the ground trying to wear down opposition fellow AFL Women’s Academy member, Ally Morphett. While Morphett got up over Prowse due to the 12cm height difference at throw-ups, Prowse was clever to avoid too many one-on-ones with the stronger Morphett, and instead use her high endurance base to cover the ground and work her opponent over. The Sturt ruck got worked over by the opposition with some fierce tackles, and even dropped behind the ball later in the game, but clearly took the chocolates in the ruck battle and was one of the more prominent ball-winners on the ground as well.” – Peter Williams via “Top Performers: 2021 AFLW U19s Championships – Thursday, April 15”