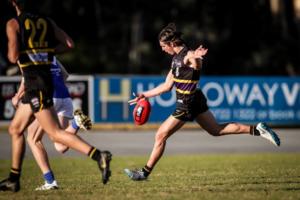 DRAFT ANALYSIS: “Maher is an inside midfielder with explosive speed and great kick penetration.” – Peter Williams

Zavier Maher is an explosive inside midfielder who, while not the prototype tall in there, is able to use his strength on the inside and speed on the outside. While he has plenty of upside, he has had some injuries over the journey – such as a broken ankle and a minor medial collateral ligament (MCL) tear – and still has areas to improve on such as his ball-winning and short kicking. Still, Maher lays claim to some seriously eye-catching traits.

Maher is a unique case when it comes to inside midfielders. He is not huge, measuring in at 184cm in the preseason testing, but what he offers compared to his peers is his athleticism. His explosive speed from the stoppage – with a sub-three second 20m sprint – combined with his sheer strength on the inside makes him more of a readymade player than most others in his position. His goal for the year was to get a full run of it after a couple of interrupted seasons. Despite some frustrating times for the teenager, Maher has shown enough off-field leadership to earn the captaincy at Caulfield Grammar, a title he held despite not being able to get out on the field due to COVID-19 restrictions.

Looking at his inside game, Maher has the ability to burst away from stoppages not only through power thanks to his strength, but also due to his acceleration which can leave his opponents in the dust if he can spot an opening. Once out of the stoppage, Maher is a penetrating kick going forward, but sometimes can rush the short kick, something he was looking to tidy up this year. Other than his short field kicking, he can be a little tidier at ground level with his hands, but once he has it, good luck getting it off him.

On the outside, Maher can use his speed to break away from opponents, and that is where his penetrating kick can come in handy. He is a metres gained player, which means he is not afraid to take the game on. While he does win a lot of his possessions on the inside of the contest, he still has low overall numbers, something he would look to lift stepping up to the next level. His contested work is great, but being able to get into more ball-winning positions and cleanly grab more ground balls will help take his game to the next level.

In the 2019 NAB League season, Maher averaged 10.5 disposals and 3.2 clearances at a whopping 58.5 per cent contested rate. With a 2.96-second 20m sprint and an 80cm running vertical jump, Maher has the natural attributes to be a damaging inside midfielder. While he has not been able to have a clean run at it and get out on the park, Maher is a highly underrated inside midfielder who is ready to go to slot into an inside midfield role, or potentially a pressure forward to begin with at the next level.

Maher is a difficult one to predict, with his lack of exposure compared to some others putting him just outside the first round. While some might see him as a third round or later prospect, there is some interest in that second round which could see him sneak inside the top 30.