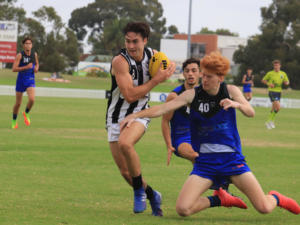 DRAFT ANALYSIS: “Trew is a strong inside midfielder who thrives in extracting contested ball, and is one of the finest exponents of the handball in this year’s crop.” – Michael Alvaro

One of the many highly-touted West Australian’s in this year’s draft class, Zane Trew is a consistent ball winner who dominates in the contested side of the game. He has been pegged as a top-end choice since starring in the 2018 Under 16 National Championships, where he earned All Australian honours. Trew has endured his fair share of injuries since; playing only three games as a bottom-ager, missing stints of the WAFL Colts season this year, and also being ruled out of the second Western Australia All-Stars fixture. In between those setbacks, the 18-year-old managed to produce form indicative of his class, including three returns of over 30 disposals in his six full-length Colts outings this year. He also flirted with senior promotion at Swan Districts in 2020, and looms as a readymade midfielder given his size and poise on the inside.

Much of what forms the crux of Trew’s strengths is conveyed at the contest, where his ability to win the hard ball and release his teammates into space by hand really shines through. At 185cm and 80kg, Trew is a good size already and will only get stronger with a few more preseasons under his belt. It allows him to either burrow in and rip the ball free, or remain balanced and think quickly on his feet. Trew’s poise really comes into play with ball in hand, as does his agility highlighted by a time of 8.39 seconds in the WA Draft Combine agility test. He does not solely rely on strength or breakaway speed, making his midfield craft one of great class and excellent timing.

Although, developing that bursting acceleration could allow other weapons to come to the fore, as the handball-happy Trew is also quite underrated in his disposal by foot. Given his efficiency and smarts via hand are at such a high standard, it is a go-to in general play with 15 of his average 28.2 disposals coming in that fashion. Being able to better utilise his usually sound kicking game will bring factors such as scoreboard impact to the fore, as well as a greater overall attacking acumen. Currently, Trew serves more as a player whose role is to release and while he does it so well, becoming a more complete midfielder could raise his standing.

Outside running is another trait which lends to that attacking factor. While Trew’s work-rate allows him to accumulate around the ground, being able to repeat run and stay in the game past his first disposal will only lift his overall impact. Speaking of impact, Trew makes his mark on the opposition with punishing tackling, only compounding his contested craft. The 18-year-old averaged 7.2 tackles in 2020 and seems a character who thrives on that side of the game, especially as he managed to lay 10 tackles in two seperate outings this year. Finding a balance for those phenomenal inside traits and his improving outside attributes will be the next step in his midfield development, but there is a terrific base to work on nonetheless.

Something which can be seen two ways is that Trew’s role at the next level is quite straightforward and obvious. On one hand, it is a massive plus that clubs will know exactly what they are getting should they draft the West Australian, a tough inside midfielder who wins the ball at will. On the other hand, they may feel he is a touch more limited in his room for growth and versatility than other prospects, though his smaller sample size suggests there is still plenty of development left in Trew.

Durability would be the main concern for clubs when considering Trew as an inside midfield option – while he is consistent on-field, he is not consistently on the field. That factor may see him slide past other similar types who have perhaps shown a touch more upside and variation in their play with more gametime, but Trew’s core strengths of clean contested ball winning and releasing disposals make him a reliable prospect when fully fit. In the second round (currently picks 20-35), Trew most likely fits in right among the middle of that range and would provide terrific value given his pure talent could well see him rank even higher than that. Clubs will also value his tenacity and character, which may boost his standing once again.