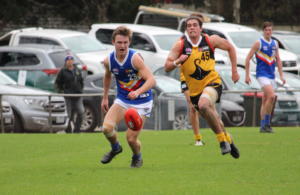 THE Eastern Ranges’ ball magnet has a case to be the biggest improver of 2019 in the NAB League, bursting onto the scene after a big pre-season and joining Mitch Mellis and Lachlan Stapleton as key ball winners in the Ranges’ midfield. He is a clearance machine, averaging 5.6 per game to go with his 4.1 tackles. The role of extractor ensured he fit the Ranges midfield trio to a t, flicking out deft handballs to his outside runners and showing a terrific understanding with them. He was also as consistent as anyone throughout the NAB League season, falling below 20 disposals just twice across 17 games and finishing with an average of 25.2 having gotten up to 37 in Round 5. Pretty now has to iron out his kicking (47.1 per cent efficiency) and add more of an outside game to become a more complete midfield prospect, and his current rate of improvement suggests he is capable of doing just that with a chance at the next level.