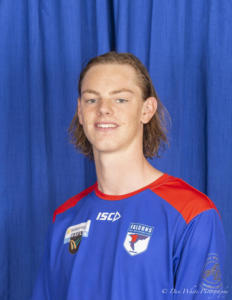 A ROUGHY from Western Australia, Zak Patterson is an overage ruck who was named in the Black Ducks’ Under-18 Championships squad but did not manage a game. Seemingly undeterred, Patterson went on to play a high-quality back-end of the season for West Perth in the WAFL Colts competition, posting mammoth hitout numbers on the regular – including an effort of 45 in Round 20. He also showed that he has some top athletic traits at the WA state combine, clocking a sub-three second 20m sprint and an 8.136-second agility test. With an 85cm running vertical leap, Patterson just needs to build his endurance and strength to become a top ruck prospect over time. There is also the potential to pinch-hit up forward, adding another string to his bow, after a two-goal performance inside 50 in Round 12.