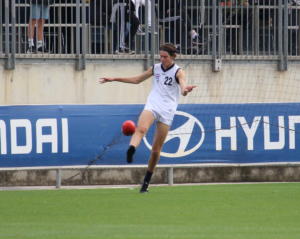 DRAFT ANALYSIS: “Reid is one of the premier key position defenders who can play in other key roles around the ground, with terrific skills and nice athleticism.” – Peter Williams

Zach Reid has not had the same chance at playing as fellow likely first round key position defenders in Denver Grainger-Barras and Heath Chapman have had this year, but it should not stop a team taking a punt on him in the top 20. The key position defender is a rare talent in the fact that he has lovely skills to match great athleticism and footy smarts.

Reid is a player who with a full season to fill out and an Under 18 National Championships to compete at, it would not be out of the realms of possibility to have pushed for top five status. His overall game and strengths are magnificent for a player of his size, and his main areas of improvement just come with time and natural progression. He is on the lighter side, so building strength, particularly for one-on-one contests is the main goal. This will be an area of focus for an AFL club, but Reid is the player you draft for the future, not for Round 1 the following season.

Reid is predominantly a key defender who can not only win the ball back from the opposition, but distribute it as well. Of all the key position players that are on offer in the top end of the draft, Reid would have a case as the best kick. It is not often a 202cm talent is a player you do not mind getting the ball in the hands of, but with his intercept drive and ball use, it is a joy to watch. Reid bares similar traits to Collingwood’s Darcy Moore, just lighter and less developed than the All-Australian.

It is no surprise for anyone to know that along with his skills, Reid’s boasts terrific aerial ability; from both the point of entry inside defensive 50, to the mark or spoil, and then the follow-up decision making, the Gippsland Power talent has that full package. His reading of the play in order to position himself to intercept is very good, and he showed at the preseason testing day he has a vertical leap to match, with running jumps of 82 and 86cm off his right and left foot respectively. His speed could marginally improve, but it’s not an area of great concern for the role he plays, and more it is about building that strength to avoid one-on-ones against monster key forwards.

The team that selects Reid will no doubt utilise him in his key position defence role, but it would not come as a surprise to see him thrown forward at times because his traits can also lend themselves to that role. In that scenario, his speed might come into question – but he is far from a truck in his movement, it is more just a slightly below average – though he has shown a couple of times that he can be thrown forward late in games and take crucial marks and slot match-winning goals – doing it once and almost twice in last year’s NAB League season.

Overall, Reid really is one of the more complete packages as a key position defender. He might not have the strength that some of the others do, but in terms of his upside, clean ball use and aerial ability, he gets a massive tick.

Reid is a player who on talent alone should go top 10 or close enough to it. It is hard to see the Gippsland Power tall slip outside the top 20, particularly with a lot of teams in search of genuine key position talents and first four off the board in the top 10. He has not been able to put the runs on the board that others have this season due to the season cancellation, but do not count him out as a superb selection in the upcoming AFL National Draft.