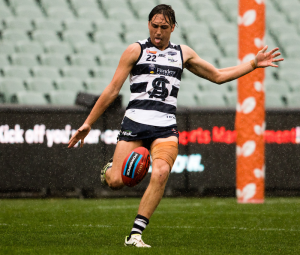 DRAFT ANALYSIS: “Dumesny is a smart prospect with a neat skillset, capable of fulfilling a range of roles on each line.” – Tom Wyman

After competing in back-to-back SANFL Under 18 grand finals with South Adelaide in 2018 and 2019, Zac Dumesny made his League debut in Round 1 of this season. He made an immediate impact and looked comfortable at senior level, playing predominately on the wing but also spending some time as a high half-forward and a medium-sized defender. A member of the AFL Academy, Dumesny represented Australia and was also selected to participate in the Under 17 All-Stars match in late 2019. This year, he suffered an ankle injury whilst playing in the Reserves, which kept him sidelined for a number of weeks. However, he returned to the Panthers’ Under 18s side for their must-win clash with North Adelaide in the final home and away round, where he gathered a game-high 33 disposals. He accumulated a further 20 touches in the semi-final defeat to Woodville-West Torrens the following week.

Dumesny has been on the radar of AFL recruiters for a number of seasons, having been a mainstay of the Panthers’ junior sides for several years. Throughout his time at South Adelaide and at school football level with Sacred Heart College, Dumesny has been deployed in a number of roles, such is his versatility.

He has played as a lead-up style forward and also as a wingman, where he was able to utilise his precise foot skills and composure with ball in-hand to locate and hit targets further afield. However, his overhead marking capacity and ability to read the play meant he was often preferred as an intercept-marking defender who can then set up the play by foot. It is down back where he has arguably played his best football to date.

The 18-year-old possesses an accurate right-foot kick, which finds its target more often than not over a variety of distances. His set shot goalkicking routine is also fundamentally sound. Measuring in at 187cm, Dumesny has the size to compete in the air against most opponents. As a defender, he is willing to stand in front of a leaping pack and either take the grab or bring the ball to ground. In addition to his aerial strength, Dumesny is clean below his knees at ground level.

At the South Australian Draft combine, he ran the 2km time trial in 6 minutes and 35 seconds, highlighting his above-average endurance. Whilst Dumesny has the running capacity to cover the ground well, he is also intelligent with where he runs. As a wingman at SANFL level, he often found himself wide open with plenty of space to take uncontested marks. This was particularly noticeable in South Adelaide’s Round 3 win over Central Districts at Elizabeth, where he took ten uncontested marks, accumulated 19 disposals and kicked a goal, gathering many of his possessions in time and space.

Although he is a clean user of the football, Dumesny does lack a yard of pace, recording a 20 metre sprint time of 3.236 seconds at the aforementioned combine. Whilst he may not have elite speed or a dazzling athletic profile, Dumesny somewhat makes up for this with his football intelligence and skills. A further area of improvement for the utility is his strength, which can be quickly rectified within a professional setting. He told of his work in that department during preseason, particularly aerially and in one-on-one situations.

Dumesny has spent time at League, Reserves and Under 18s level this year and produced a solid, consistent season. Although he missed some time nursing a sore ankle, the utility has built a solid profile for himself and appears likely to find a home at AFL level. Although he may not boast explosive athleticism, his versatility, ball use and overhead marking capabilities will certainly appeal to clubs.

A hard worker on and off the field, Dumesny has shown he is capable of filling a variety of roles against more experienced bodies, but perhaps looks best off the half-back flank. A club seeking a developable utility with natural football smarts and a clean set of skills could select the South Australian somewhere amid the middle stages of the national draft.