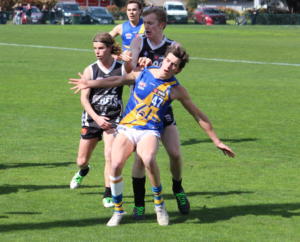 DRAFT ANALYSIS: “Deployed in multiple roles, Kennedy is a strong overhead mark, competes well in contests, and his mobility is superb."

Splitting playing commitments with the Sandringham Dragons in the TAC Cup and Caulfield Grammar in the APS competition, Will Kennedy has caught the eye of recruiters and draft experts alike, well-corroborated by selection in the Vic Metro squad and, more recently, invitation to the National Draft Combine. Throughout the season, Kennedy displayed his versatility as a swingman. For the Dragons, Kennedy was often deployed in the backline, but frequently drifted forward and also provided ample assistance in the ruck. The 198cm prospect was regularly seen to compete well in defence, with his spoiling and intercept marking ability well-documented throughout the season. What has Kennedy standout from fellow key-position prospects, though, is his mobility around the ground. His movement is proficient for his size, in addition to a remarkable endurance base. Not only is he a booming, long kick, but Kennedy’s field kicking also proved eye-opening throughout the 2018 season. A standout performance came in round 10 of the TAC Cup season, where Kennedy’s 19 disposals, five marks and three tackles in a key-defensive effort saw him earn the full-back position in AFL Draft Central’s Team of the Week. Kennedy was also impressive in the Dragons’ 43-point win over the Bushrangers in week two of the TAC Cup finals series, with 16 disposals, six marks and 15 hitouts.

Kennedy’s versatility is his clearest strength, playing his best TAC Cup football this season in defence, despite being widely regarded as a developing tall forward who can pinch-hit in the ruck. His mobility around the ground has become a well-known feature of his game, for an almost 200cm player,  Kennedy is able to cover the ground better than most in that regard. If he did not have the likes of Ben King beside him he would look even more impressive in that Dragons’ outfit. He is not a super athlete in the way that his acceleration and agility is not that good, but his high-level endurance allows him to keep a consistent pace throughout the four quarters and often wear down his opponents over time.

Furthermore, his kicking is often penetrating and accurate and while he finished the TAC Cup season with a kicking efficiency of 58.7 per cent, he had just 10.7 per cent of his kicks end in direct turnovers, so he was able to use the ball well when given the opportunities. Vic Metro was a hard squad to break into so while Kennedy did not quite get a chance there – with injury playing a major part – he was able to impress through school and TAC Cup football. Kennedy can also find the football which is an impressive trait, averaging more than 14 touches per game, better than many similar positioned players.

At 198cm but just 86kg, Kennedy is still very much a raw prospect, who will likely need time to put on weight in order to compete with men at AFL level. His strength in the contest at under-18 level is strong, but will look to add at least 10 kilograms to his frame over the next couple of years in the AFL system. Additionally, Kennedy will look to improve his consistency, after drifting in and out of games throughout the 2018 season. Had a stellar elimination final against the Bushrangers, but could not bring the same impact against the Stingrays in the preliminary final, with just three effective disposals. At 198cm, Kennedy will never be the quickest footballer, but may also look to improve his speed over pre-season.

Kennedy is likely to be a sought-after prospect due to his versatility; he has impressed as a key-defender, proved impactful up forward, and is more than capable in the ruck, where he has demonstrated ability not only pinch-hitting, but winning hit-outs himself. By extension, the Caulfield Grammarian is mobile across the ground, with his kicking also a prominent feature.