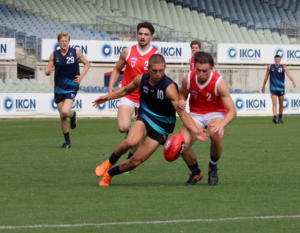 Will Phillips’ list of accolades runs deep and proves exactly why he is regarded a top five prospect heading into the 2020 AFL Draft, even without contributing any top-age football. The Oakleigh midfielder lays claim to an illustrious junior career; including the 2017 JL Williams Medal, Under 16 Vic Metro MVP award in 2018, and a 2019 NAB League premiership with the Chargers. Having developed alongside the likes of Matt Rowell and Noah Anderson in last year’s flag-winning team, Phillips has continually been able to hold his own alongside the best of the best, even becoming one of the rare bottom-agers to represent the stacked Under 18 Vic Metro side of 2019. He has also starred in every showcase fixture possible, making him one of the first choices for the most recent AFL Academy intake, and subsequently the 2020 National Draft Combine. Phillips was looking to take over as a leader at Oakleigh and for Caulfield Grammar in the APS competition, boasting such a complete game and outstanding resume thus far. He looms as a top five lock.

Phillips is hardly the player you would expect to put forward a flashy highlight reel, but everything he does in a pure footballing sense is nothing short of elite. The stoppages are where he shines, able to extract the ball at will and accumulate possessions at a tireless rate each game. Phillips’ contested acumen is top notch, as he so often finds a way to be first to the ball and gather it cleanly under duress. His one-touch ability is key to much of his success, while clean disposals on the exit of congestion put his side right on the front foot. He also competes defensively, laying strong tackles and cutting across his opponents to effect timely smothers. As a midfielder, Phillips does just about everything you could ask for at the contest.

At 180cm, some would question Phillips’ ability to translate such inside prominence at AFL level. He cuts a thick figure though, strong through the legs and core. One should only look to how Matt Rowell adjusted to senior football at a virtually identical size, and that the current Brownlow Medallist measures up at 177cm to allay such concerns. Phillips has all the nous required to find the ball at whatever level he is playing at. He may not be lightning quick, but has just enough acceleration in his five-step burst to spring out of stoppages and release the ball with ease. His vision and awareness in tight spaces are incredibly good too, allowing him to find the best option available each time.

In 2019, Phillips averaged 22.1 disposals across his 10 NAB League outings, with over two-thirds of them coming via hand. Again, that kind of ratio can lazily be seen as a knock on his output or impact, but is not truly indicative of either. Phillips’ efficiency on the inside, particularly by hand, would be an invaluable asset to any midfield. An engine room requires that reliable extractor to win first possession and release others – Phillips does just that. With his bursts away from congestion, he can also get to the outer and showcase his dual-sided skills by foot, which are typically clean in the short-range and on the move. He can chain together his possessions too, working one-two plays through the middle to figure out a way forward.

As far as improvements go, we enter the realm of nit-picking when it comes to such high-level talents as Phillips. During preseason, the man himself said he wanted to improve on attending as many contests as possible, hinting at expanding his running capacity in order to do so. His 2km time trial effort of 6:38 at the National Combine was quite solid, and will allow Phillips to gain an even greater balance of inside and outside influence. The chain-possession trait he boasts is a good platform to grow off and Phillips has already been tried on the outer with Oakleigh, starting on the wing as the likes of Rowell, Anderson, and co. went to work.

Looking further at versatility and balance, while Phillips has cut his teeth on both sides of midfield thus far, some may also want to see how he fares on other lines. His scoreboard impact on paper is not overly impressive (three goals in 10 games last year), but Phillips certainly knows how to find the goals once given the opportunity. As he has shown in big games and showcase fixtures, Phillips’ finishing is indicative of his overall class. Again, this factor reverts back to his balance away from the contest, where if he can find the ball in wider expanses, his attributes will be able to shine even brighter. He is just so dominant on the inside though, and backs himself in to win each contest. Had he been given the opportunity to improve on that in 2020, Phillips could well have entered Rowell territory as the clear number one choice in this year’s draft class, such is his consistency and natural footballing ability.

As the clear number one proven and pure midfield option in this year’s draft, Phillips looks likely to be taken within the top five picks. The 1-6 projection takes into account potential bids for academy talent and favouritism towards key position stocks around the same range. Clubs may also look for taller, more prototypical modern day midfielders within the top 10, but it is difficult to see Phillips slipping much further than the top five. He has enough runs on the board to suggest he could even end up as one of the top two or three players out of the 2020 pool, as he looks a locked-on 200-game AFL player. As it stands, he could link up with a couple of his former Oakleigh teammates at Gold Coast with pick five, but he would also suit clubs like Sydney and Hawthorn going forward. They hold picks three and four respectively.