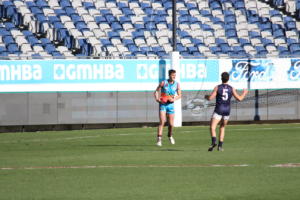 DRAFT ANALYSIS: “The Brisbane Academy skipper proved his worth as an accumulator who works hard around the ground, with room to improve in his disposal and overall impact.”

WILL Martyn looked like being the Lions’ leading academy prospect in 2019 after a hot start to his season in five high-level NAB League outings. Since, he went on to feature among a well-balanced Allies midfield and snuck into Brisbane’s undefeated premiership winning NEAFL side, with just his third match coming in the grand final. Martyn’s ability to find the ball in all areas of the ground and his consistency are his best traits, with his work rate making him a valuable leader at Under 18 level – especially among a talented group of Allies considered for the captaincy role. While he tapered off slightly toward the end of the year and could not quite recreate the high-disposal performances of his NAB League stint, Martyn played his role well in every side he lined up for and could prove to be a solid late option for the Lions come draft time. His effort and off-field qualities are ones which seem to be highly valued by the Brisbane AFL coaching staff, so he could also get a look-in on the back of that and his National Combine invite.

Martyn’s strengths of consistency and accumulation really came to the fore during his NAB League cameo with the Lions Academy, averaging 28.8 disposals, 7.2 marks, and 4.6 marks over five games and racking up over 30 disposals in four of those outings. His numbers were not quite the same during the national championships – as is the case for many prospects – but his range of 13-16 over all four appearances in less of a permanent midfield role still stood up. A good number of Martyn’s disposals come on the spread too, with his sound endurance (21.2 yo-yo, 6 minute/16 second 2km) allowing him to provide an option around the ground. It shows in his 68.3 per cent uncontested possession rate and 7.2 marks per NAB League game, often working back to help out the defence and floating forward to try and have a say inside 50. That kind of work rate and willingness carry a side on his back points towards his leadership – on top of the obvious captain tag – while also proving to be durable given he played almost every game he was available for early on.

While Martyn can find a heap of the ball, his disposal by foot can waver at times in the forward half, with much of his contested work a little rushed (2.2 kicking clangers per game at 57.1 per cent efficiency in the NAB League despite just 31 per cent of his possessions contested). Along with improving his kicking efficiency, Martyn’s overall impact within the contest will need to improve, because his hands in close are superb and his overhead marking is strong, but ironing out the outside kicking game to have greater influence going forward will be important. His impact on games in midfield was usually still high given his pure volume of possessions, but having to adapt to roles on the outside and not being the primary ball winner hurt his game slightly for the Allies and in the NEAFL. His disposal-high of 11 against more mature bodies and the added forward minutes means Martyn may need a touch more time to develop and find a role at the next level – with scoreboard impact perhaps a way he can do that. He seemed to be the most damaging as a bottom-ager playing at half-forward where he was too strong in the air and one-on-one for his opponents and his ability to kick long made him that damaging player in the front half. Potentially he could play that fluid role between wing and half-forward using his running capacity to work over his opponents. The fact he has added 10kg to his frame this year shows he has the capacity to work hard and develop, and could prove to be an underrated prospect later in the draft.