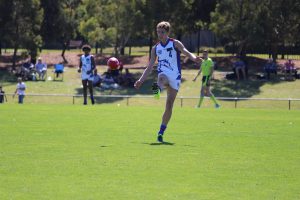 DRAFT ANALYSIS: "One of the more top-end father-son prospects in the draft pool, Kelly is a composed, versatile key defender with enormous upside."

Will Kelly is the son of Collingwood premiership player Craig Kelly, and brother of current Adelaide Crows defender, Jake Kelly. The key position defender is able to be selected by the Pies under the father-son rule and looks increasingly likely to end up there, after many pleasing performances throughout the year. Kelly’s form has been consistent and encouraging, especially during the National Under 18 Championships where he impressed down back for Vic Metro, averaging 15 disposals. His versatility, kicking skills and ability to lock down dangerous forwards make Kelly one of the most reliable and appealing key defenders in the draft pool. It is quite a remarkable rise from a player who managed just the one game last year for the Oakleigh Chargers and was more of a potential draftee, to one who has been talked about as a likely second rounder. His rise in the past 18 months has been fantastic, and it would leave recruiters enticed by how much more he could still develop. He can play a number of roles up both ends of the ground, and he still has areas he can improve on, but he has the natural ability to go far, and that has come to the fore in recent months.

Kelly has plenty of likeable attributes that include his versatility and kicking skills, which are two of the best elements of his game. He has spent time up forward in school footy, along with plenty of minutes down back for the Oakleigh Chargers. He can play as either a rebounding or lockdown defender, which is what sets him apart from most key defenders in the draft. Kelly was one of the best performers for Vic Metro during the National Under 18 Championships, especially against South Australia when he gathered 17 disposals across half-back. In that match he subdued potential number one pick, Jack Lukosius in what was a feather in his cap. Later in the year, he restricted fellow top five pick, Ben King to just one goal as the Chargers strangled the Dragons at Avalon Airport Oval. In that match against King, Kelly played the typical lockdown role on King until the big man went into defence to find touch and help out the Dragons backmen, and then Kelly was able to also play “loose” not in the sense he did not have an opponent, but was able to afford more freedom by being able to run off and take intercept marks, driving the ball forward.

He reads the play exceptionally well and his intercept marking has been a real highlight, taking multiple eye-catching marks throughout all levels this year. His ball use and kicking technique are sublime for someone of his size. At 193cm, his ball drop is much cleaner and trustworthy than most other key position prospects that are similar in height, which is another reason that makes Kelly such a likeable prospect. However one knock on his kicking is that at times he looks like he tries to be too technical with his kicking action and it can result in turnovers. With a 16.7 clanger kick percentage in the TAC Cup (albeit from a small database of 60 kicks), it shows at times he can turn it over. But when he is able to run forward and assess the option, he is a really reliable kick and can hit targets over all distances.

Kelly has some areas of improvement, specifically with his acceleration and agility. At the start of the pre-season, he ran a 3.17-second 20mtr sprint and a time of 9.019 in the agility test, both ranked below average. In a game, he is good once he can get going, but does not have the burst away – which in fairness, not many key defenders do. The more noticeable improvement is his agility which you can see, even in his highlights, when he attacks the ball carrier, if the ball carrier changes direction, it takes Kelly a while to turn and chase. These are areas that can certainly be improved with movement training and at the elite level, Collingwood will be right onto it. He is however, able to take strong intercept marks from his ability to read the play and defensive positioning, which have both helped make up for his lack of speed and agility, which sometimes becomes unnoticeable. The key to beating Kelly on the lead, is a half-lead where rather than leading 30-40m where the defender can pick up speed and close down with a fist, leading for 15-20m where the quick burst can catch him off guard. Finally, Kelly is still lightly built for a key defender, and will take time, but his natural ability is there, and it is nothing a big pre-season at the Holden Centre cannot fix.

Without a doubt, Kelly is one of the top intercepting, key defender prospects in this year’s draft. After a spectacular top-age season, Kelly has grabbed the attention of many onlookers and could possibly attract a bid as early as the first round, but most likely in the second. He acquires all the needed attributes to make it at the next level and Collingwood will be definitely be pleased that they have first dibs on him under the father-son rule. The most exciting part for Pies fans is the fact that he really just needs to bulk up and development some more movement techniques to become a more damaging defender, and with the Pies desperately needing a young key defender for the future, Kelly, along with Chargers’ teammate Isaac Quaynor could be side by side for the foreseeable future.