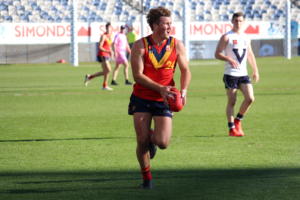 DRAFT ANALYSIS: “Will Gould is a no-fuss, clean kicking key defender possessing all the required traits to slot straight in at AFL level.”

IT HAS been quite the season for South Australian key defender Will Gould. He recently put the finishing touches upon a glamorous junior career with a SANFL League premiership with Glenelg – the club’s first in 33 years. Earlier in the season, Gould was named an All-Australian in the National Championships – his second in consecutive years. He went within seconds of leading SA to victory over Victoria Country at GMHBA Stadium, hammering a goal on the run late in the final term to put the Croweaters ahead. Although it was short lived, Gould was arguably best on ground, tallying 26 disposals, 12 contested possessions, five marks (two contested) and a goal. The unanimous captain of South Australia and skipper of Australia for the AFL Academy’s clash with Casey, Gould’s long kicking, courage and leadership have seen him draw comparisons with West Coast premiership captain and fellow SA country native Shannon Hurn. An old-school country kid with a burly frame and no-fuss attitude, Gould is amongst the most ready-made prospects and, despite an awkward height, projects as one of the more unique talents in the draft pool.

Will Gould has been on the radar of AFL scouts for several years, after showing promise at the Under-16 National Championships. An immediate highlight of Gould’s game are his foot skills over both short and long distances, having been trusted with the kick-in duties with Glenelg and South Australia. He has a thumping right foot kick which commonly travels 50 metres with relative ease and suitable penetration. A physically imposing defender, Gould’s ability to read the flight of the ball, intercept then generate rebound from defence, matched with a potency in the air ensures he can match-up on small, medium or tall opponents. A former state sprinter, ‘Gouldy’ has a commanding presence about him and while not quick, regularly looks to break lines with his explosive power. He is certainly not afraid to inflict his physicality upon his opposition, and when he hits them, they feel it. In 15 senior games with the Tigers (including each of the clubs three finals), Gould averaged 19.3 disposals, 4.9 marks, 1.9 tackles and, perhaps most encouragingly, he initiated an average of 6.3 rebound-50s. These statistics complimented his average of 21 touches and 7.2 rebounds for SA during the national carnival. Whilst some have raised question marks over his endurance, Gould possesses a huge appetite for hard work. Also appealing to AFL clubs is his leadership and courage, exemplified by often running back with the flight of the ball into oncoming traffic. Following an outstanding year, Gould has surely cemented his place as one of the most sought-after, two-way defenders in the draft pool.

Although his defensive versatility is regarded as one of Gould’s greatest strengths as a backman, his height of 191cm is considered on the small side for a key defender. And for this reason, many draft pundits have pencilled him in as a general defender rather one who will be able to handle the modern-day forward giants in the mould of Tom Lynch or Tom Hawkins. Although he has the strength, this five-10cm height discrepancy could be cause for concern. Furthermore, Gould has been deployed throughout the midfield in limited patches. With his frame, explosiveness, ability to win the contested football and polished skill set, Gould has the tools to transition into a top-tier onballer. However he would also need to build up his endurance (19.4 on the yo-yo test at the National Draft Combine), as well as his athleticism which includes speed (3.218 seconds) and agility (9.004) to more effectively impact in a midfield transition. But athleticism is not his strength, instead Gould is a composed player with an elite kick and vision and leads from the front in defence. A traditional footballer, Gould just knows what to do, when and stands up when his moment comes.