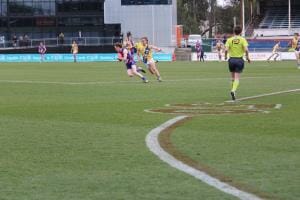 DRAFT ANALYSIS: "An outside midfielder with high endurance and clean hands."

Will Golds missed out on the opportunity to put his case forward in his bottom-age year after suffering an anterior cruciate ligament (ACL), and has now performed strongly in both the Associated Public Schools (APS) competition for Xavier College, and then upon return to the TAC Cup with Oakleigh Chargers. He is a natural athlete with high-level endurance and agility, although he is not overly quick, Golds is able to win plenty of the football and work his way through traffic and use his clean hands to advantage when on the outside. He spent most of his time on the wing with Oakleigh and had some impressive games, but is still building his form and consistency. He can use the ball fairly well, although he can also make some clangers by foot, which is an area he can tidy up, but is not a huge concern given his limited preparation over the past 18 months. All up, Golds is able to find the footy, distribute it by hand and present himself in a scoring chain through his hard running.

Golds’ elite endurance saw him star in the Yo-yo test and 2km time trial at the National Draft Combine. The midfielder recorded a 21.8 in the yo-yo test and 6:11 in the 2km time trial to be in the top group of athletes for gut-running. Along with his high endurance rate, Golds has impressive agility, which resulted in a 8.28-second time in the agility test at pre-season, however he could not quite replicate that at the recent combine. He moves well through traffic and is able to run all day which athletically is something that clubs will be attracted to whether he continues as an outside midfielder or develops a further inside game.

Secondly, Golds has no issues finding the football, averaging 23.1 disposals per game in the TAC Cup competition. Predominantly outside, Golds was most effective with his hands, finishing the season with an elite 85.1 per cent, while his kicking was let down at times by clangers – recording 16.7 clanger kick percentage – when he was on with his disposal, he could still use it fairly well. It is certainly more of his execution than decision making, with Golds regularly able to pick out the right player to pass to, and sometimes delivering lace-out passes. His footy IQ is quite high and is another area that gives clubs confidence he can develop further.

As already mentioned, Golds has a few areas in which he needs to improve to develop a more rounded game. He is predominantly outside, so building a greater presence on the inside is important. He did start at centre bounces during the finals for Oakleigh, however he is usually the one receiving the handball and then giving and going rather than being the one who will be on the ground feeding it out. He is often afforded time and space, which is unlikely to occur at AFL level, so it is always an area outside midfielders should look to improve. Another area he could develop is his ability to hit the scoreboard, with just one goal – off the ground against Sandringham Dragons – for the season in seven games, Golds could certainly impact the scoreboard more when he gets to the outside. Additionally, consistency is something that seems to be a question mark over a lot of under 18s players, but it rings true for Golds as well, and is something that will come with another full pre-season.

Will Golds is an outside midfielder with some top athletic traits in his endurance and agility, and can win the football regularly. He has good game smarts and is clean by hand, often trying to break open the game through a series of handballs. While he is not the quickest player, he does have the evasion skills to work his way through congestion and assist his team in scoring chains. He is a hard player to predict where he goes, with a potential late/rookie selection, or given his athletic traits, Golds might be plucked out from the third round onwards. He has plenty to work on, but plenty to work with and could be an exciting player at the next level.