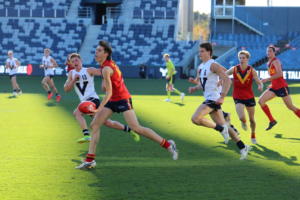 DRAFT ANALYSIS: “Will Day is a lightly-framed but skillful rebounding defender with all-round athleticism and a high upside."

ATHLETIC South Australian Will Day is one of the draft classes most underrated defensive prospects. Having been relatively unheard of outside of SA prior to the 2019 season, Day swiftly made a name for himself at the mid-year National Under-18 Championships and was perhaps unlucky to miss out on All-Australian selection following a strong carnival for the Croweaters. Alternating between school football commitments with Sacred Heart, SANFL Reserves and Under 18s level, the cousin of Gold Coast tall Sam Day has emerged as a likely early selection for clubs placing a high value upon upside and future scope. Commonly deployed as a third or fourth tall defender, given his 187cm height, Will exemplified excellent composure when rebounding from half-back, coupled with a natural ability to read the play and intercept opposition forward entries. Also a precise ball user with either side of the body, Day will no doubt benefit from a summer or two in the gym to fill out his frame before attempting to break onto the senior stage. However his classy movement, polished skillset and aerial prowess make him one of the most exciting medium defenders.

A former state baseball shortstop and ultra-talented sportsman, Will Day spent the majority of the 2019 season in defence across all grades and projects as a rebounding backman at AFL level. He has drawn comparisons to fellow South Australian and 2018 Suns draftee Jez McLennan for his intercept marking prowess. Day is an excellent all-round athlete and showcased his speed (2.96 20m sprint), endurance (21.2 yo-yo test) and leap (88cm running vertical) at the SANFL preseason combine testing. These athletic traits, paired with courage and an exceptional ability to read the play ensures the South Australian is ideally suited for a role patrolling the half-back line where he can orchestrate rebounds from defence. His foot skills, on both the left and right foot, allow Day to execute difficult kicks when under pressure. No doubt appealing to AFL clubs is his class, composure and movement with and without the ball, often appearing to cover the ground with minimal effort. Upon struggling for selection with Glenelg, Day transferred to West Adelaide and, this season, excelled in four reserves games with the Bloods’, where he averaged 17.4 disposals, 5 marks, 3.3 tackles and three inside 50s. These promising numbers reinforced his average of 26 disposals, 8.5 marks and 5.6 rebound-50’s in the SANFL Under 18s and 18 touches and 5 marks for the South Australia.

Whilst the medium-sized Day has exhibited his talents at a number of levels in 2019, he is lightly framed and considered a selection for the future, rather than one who can make an immediate impact at senior level next season. Currently weighing in at 70kg, he lacks the strength to compete with seasoned AFL bodies. Granted, Day may be a rangy, skinny player throughout his career, but this is an area clubs can easily build-up to the required standard over several pre-seasons. Although his eye-catching traits from half-back have been well documented, Day been exposed throughout the midfield only minimally and was restricted to a role as a pure defender for SA. Therefore, his potential in the middle of the ground remains unclear, in particular on the inside. Once he builds his strength, he could develop more of an inside game and be a versatile utility. However he certainly possesses a plethora of traits, including foot skills and speed, which suggests he could morph into a damaging midfield weapon.