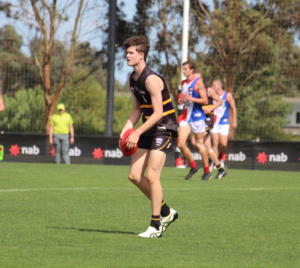 WILL Christie had a bit of an up-and-down season but showed some promising signs earlier, initially named in Vic Country’s extended squad for the trial games. An overager in the NAB League this year, Christie possesses a strong vertical leap (82cm running) and is able to compete at ground level as well. Despite having the leap, Christie can still improve his contested marking and skills side of his game. One aspect of his game that stood out was his tackling pressure, which saw Christie average 4.3 per game, impressive for a player of his size. The fact he could rotate through the ruck or play at either end makes him a valuable commodity and with his competitiveness, Christie has produced a strong season to be considered as an overage prospect.

DRAFT CENTRAL’S INTERVIEW WITH WILL CHRISTIE AT THE 2019 STATE DRAFT COMBINE: