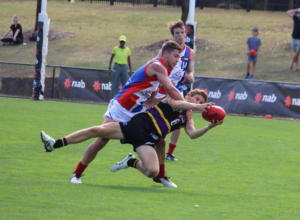 THE Allies medium forward is often used in the link-up between midfield and forward, with an ability to hit the scoreboard from range. Chandler has struggled with consistency at times, and has even been trialled in defence for patches, but as a player who is creative inside 50, Chandler is more of that leading forward who can be a playmaker if he can work on and develop other parts of his game. In 2019, Chandler averaged the 9.5 disposals per game, but most of which were in and around the forward 50 with 2.8 inside 50s as well as nine goals in 14 games. Managing a game for the Allies at the Under-18 Championships, Chandler had four touches, three inside 50s and two tackles. While he still has areas to develop, his athletic traits such as his speed and vertical leap, as well as his scoreboard impact and footy IQ mean he has some draftable qualities that clubs would be focusing on.

DRAFT CENTRAL’S INTERVIEW WITH WILL CHANDLER AT THE 2019 ROOKIE ME DRAFT COMBINE: