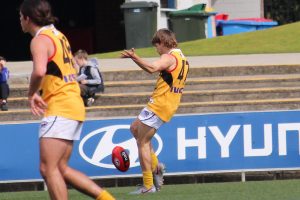 DRAFT ANALYSIS: “Bravo is an inside midfielder with clean hands and some great athletic traits.” – Peter Williams

Will Bravo is a strong, tough inside midfielder who showed in his bottom-age year what he was capable of at NAB League level. Whilst his consistency could improve and his kicking iron out, there are plenty of ticked boxes for the teenager who was fierce and tough when in congestion. He also had plenty of speed and evasion to show he could play as an inside midfielder or forward at the next level. Without having played a game this year, Bravo was unable to spend more time on-ball, but has enough runs on the board from his bottom-age season to show his wares.

Bravo is not a huge ball winner, but his work on the inside is where he stands out. In 2019, he averaged just over 10 touches a game, but ran at 44.9 per cent contested and had some of the cleanest hands in close. Often under pressure or winning his own ball – he had a very low handball receive rate – Bravo does not take a backwards step when it comes to his attack on the football. One of the stronger medium-small players going around, Bravo makes opposition players nervous when they get their hands on the ball due to his dual threat of power and speed which will not only see him run down opponents, but make sure they feel it too. With ball-in-hand, Bravo is able to exit stoppages through his evasion, and whilst most of his work has come in the forward half, he would not have any question marks over his midfield ability.

Bravo finished off last season in style, picking up 20 disposals, three marks, seven clearances, seven inside 50s, two rebounds and a goal in an elimination finals loss to Calder Cannons. He has not played a competitive match for points since then for the Stingrays, but with three of those clearances being centre clearances and running at almost 50 per cent contested, he produced the same numbers he did when he was playing out of the centre square. By hand, Bravo executes 77.4 per cent of the time effectively, and instead it is when he rushes with ball to boot that his effectiveness drops. His kicking went at 50 per cent from his 14 games, and whilst it was often under pressure, it is an area he could certainly improve for the future.

Whilst it was briefly touched on above, without a doubt Bravo wins his own ball with less than a third of his touches coming from a handball receive. In only two games for the entire season did he have more than 50 per cent handball receives to disposals, and in those matches he played more of an outside role. As a consistent tackler – laying a tackle in every game – Bravo has great defensive pressure and work ethic as well. He only kicked the seven goals in 14 games, but it is his pressure that stands out more than his finishing, and he did often play further up the ground and rotated through the midfield.

It would be better to see him win more of the football on a consistent basis, with six single-digit disposal games, and only the one game – that final – where he had more than 16 touches. The frustrating thing about not playing the season was seeing just how well he could do full-time on-ball and he could have allayed those question marks, but if his final was anything to go by, he would do just fine in there. He might not have the accolades of some other inside midfielders this year, but he has the traits to watch going forward.

Bravo is one of a number of players who could have really increased his draft range with a full season in 2020, given he showed enough that should suggest he is worth a late or rookie chance. He has the athleticism to match the inside contested work, it will just be whether or not a club decides that his bottom-age year and limited on-ball minutes will be enough. He could be a value pick later in the draft given his skillset.

Q&A with Will Bravo