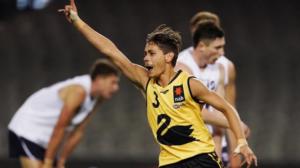 A POCKET rocket forward with elite agility and an eye for goals, Thorne has shown on multiple occasions that his talent outweighs his 167cm and 57kg frame. Breaking the AFL Agility test record at a State Draft Combine, Thorne clocked up a time of 7.761 seconds and threw his name back into consideration. He also showed he can jump with a 77cm running vertical jump, which along with his natural goal sense and defensive pressure makes him a damaging forward specialist. After a five-goal haul in Colts, Thorne stepped up to play two League games this year. While he is unlikely to play another role outside of forward 50 if he makes it to the elite level, he ticks the box of both offensive and defensive traits, exemplified by his averaged of 3.3 tackles and 1.7 goals per game at the 2019 Under-18 Championships for Western Australia. Aside from his lack of size and versatility, there is not too much else he can develop because he does have the natural skill and talent, with just a wait to see if a club will take a chance on the determined and athletic small.