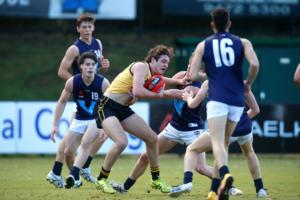 DRAFT ANALYSIS: “Ruscoe is a utility who can play anywhere on the ground, due to his marking ability and his skill execution.”

DESPITE suffering a season-ending shoulder injury in the last game of the AFL National Under-18 Championships, Trey Ruscoe had done enough to gain interest from several clubs. A utility who can play at either end of the ground, Ruscoe is strong overhead, positions himself well and has neat skills. Although undersized, Ruscoe always competes and wins the majority of one-on-one contests, even against bigger opponents.

Over the past two seasons, Ruscoe has established himself as one of the better utilities in this year’s AFL Draft pool after some stunning performances. As a bottom-ager last year, Ruscoe booted 11 goals from 10 games and averaged 14 possessions, three tackles and two marks. He really caught the eyes of recruiters with his performance against Claremont in round three when he booted six goals from 20 possessions. He was also a member of the train-on squad for the WA Under 18s State Academy.

When playing as a key defender, Ruscoe was smart with his positioning and due to his strong overhead marking ability he was able to intercept many attacking entries by the opposition. He was also sound with his decision-making when he had ball in hand, and due to his excellent skill execution he was able to provide great attacking rebound.As a key forward, his leading patterns were excellent, he was powerful in one-on-one contests and he was an accurate set shot for goal. At times, he also showed he could play as a big-bodied midfielder who used his body as a battering ram to win the contested ball and clearances for his team.

Despite showing off some awesome versatility, it is still hard to pinpoint where Ruscoe plays his best footy. At this stage, it seems more likely that the club that picks him up will view him as a defender who can play on key position forwards or medium-sized hybrid forwards. Once he and his club figure out his position, expect Ruscoe to knuckle down to make that position his. The other major query on Ruscoe is his size. At 192 centimetres, some clubs may view him as a key position player, while others may view him as a medium-sized hybrid player. However, the club that does pick him up will have a player who is competitive, and hates losing. He also has the skills and the smarts to beat his opponents.