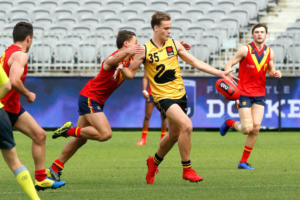 DRAFT ANALYSIS: “Rivers is a big-bodied midfielder who oozes class and leadership.”

IN 2019, Trent Rivers produced an outstanding season of football that should see him rise up many draft boards. A big-bodied midfielder, Rivers is balanced, smart and is an excellent distributor, especially via foot, making him comparable to former Richmond and GWS star Brett Deledio. He has also shown an ability to play either as an inside or outside midfielder and can even station himself on the half-back line.

Locking down one position
Endurance

There were high expectations on Trent Rivers in 2019, after he finished second in East Fremantle’s Best and Fairest and finished in the top 20 of the Jack Clarke Medal in 2018 – and he truly delivered.

Despite playing just nine games for East Fremantle, Rivers finished second in his club’s best and fairest, finished third in the Jack Clarke Medal and eighth in the WAFL Colts Coaches Award. Across the nine games, Rivers booted 10 goals and averaged 27 possessions, five marks, five tackles, and five inside 50s. He was named in the best on six occasions with his best performances coming against Subiaco in Round 2 (29 possessions, sic tackles, five marks and five inside 50s), East Perth in Round 18 (25 possessions and a goal) and Perth in Round 19 (30 possessions and two goals).

As a player Rivers is acutely aware of what is happening around him, knows where to position himself to win the ball, reads the play well, is smart with ball in hand and executes his skills very well for someone his age. He also tested well at the National Combine especially in the agility test (8.10 seconds).

However, one of Rivers’ greatest strengths could be considered an area of improvement. His ability to play in almost any position is excellent for someone his age, but he did not really nail down one spot this year. While some of the top 10 players might be considered elite in their respective positions, Rivers is solid across the board, without determining a clear standout role. Although, once he’s in an AFL system, he has the scope to make any position his. The other area of improvement for Rivers in his own words is his endurance, which while still solid, could improve. He recorded a 21.1 yo-yo test and a 6.57 2km time trial at the National Draft Combine, which is impressive in itself given his delayed pre-season. Given this is another area he can build upon, Rivers is a really promising prospect who could have an impact at AFL level early on in his career.