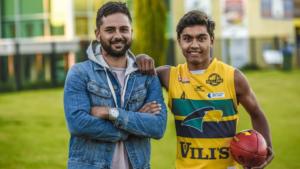 RATED highly coming into the year as an outside midfielder, Burgoyne has not been able to get on the park in 2019 due to hamstring issues, and comes into the AFL Draft as an unknown with the Port Adelaide father-son prospect unable to test injury-free since the start of 2018. He has that exciting X-factor about him, and those clean hands at ground level and neat skills. Burgoyne’s 12 games in the 2018 SANFL Under-18s season gave a glimpse into his potential, having a disposal high of 26 in his overall average of 17.8, while also going at an ultra-impressive 88 per cent disposal efficiency. His high ratio of kicks makes that percentage all the more positive, with his class on the outer clearly evident. His consistency was always a question mark, and his size is an area to build as well as he weighs in at just 67kg. A raw type at this stage, Burgoyne may benefit from another season in the state system to build out and gain an on-field run of form before taking the next step, with Port his likely destination if any club is to pull the trigger this year. Port has nominated him as a possible rookie selection which means it cannot match in the National Draft should there be an unlikely bid, though it can take him without a challenge in the rookie draft.