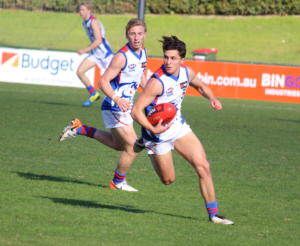 DRAFT ANALYSIS: "An elite user of the ball who makes the right decisions time and time again thanks to high footy IQ, while he has defensive aspects he can build upon to develop a more all-round game."

THE Oakleigh Chargers co-captain has put together a strong top-age year after promising signs in his 2018 bottom-age season. Possessing an elite kick that can break down opposition zones and produce low bullets inside 50, Bianco is a highly damaging player at his best. He has been consistently strong all year, and while his Under-18 Championships was slow to get going with his game against Vic Country, he worked into the carnival to have an impact by the end. Being an outside ball user, areas for his development include his inside game and defensive work with Bianco often being the designated ball user who teammates utilise going forward. If he becomes more of a two-way runner as many top midfielders have done, then it will be the next step on the way to a really strong future.

Bianco is undoubtedly one of the more eye-catching players in this year’s draft, with nice skills and decision making that allow him to play off half-back or on a wing and create drive for his side. His football IQ is quite impressive and his consistency is an area to admire, picking up more than 20 touches in all bar one of his games this season. He averaged 26.9 disposals for the season, including a massive 42-disposal game over Tasmania Devils in Round 6 where he laid nine tackles. Bianco then proceeded to lay 10 tackles against the Knights the week after in his 17-disposal game to show he can develop that defensive side of his game that has been an area of improvement. He finished the season with an average of four tackles per game, but taking away those back-to-back games and his average sits at just 2.8 per match. It is clear that his role is to win the ball, run and create havoc for the opposition, and unlike some half-backs he is not afraid to win his own ball. His defensive work is an area that can certainly improve, but it is more the fact of playing a role for his team that best advantages his side, which is his elite ball use and decision making.

When Bianco wins the football you know he will generally always make the right decision, going inside 50 with low bullets or finding teammates out in space that very few can. If he is on the wing he will try and run the 25-30m and just get within reach of putting it 35-40m out for his teammates to have a set shot attempt. During the finals series he served the ball up on a silver platter for the likes of Jamarra Ugle-Hagan and just added a touch of class to his side. Going forward himself, Bianco has only booted the three goals this season, with two of those coming against the Geelong Falcons in Round 13. His third and final goal was the match-winner against Gippsland Power in the pouring rain, showing he can stand up in big moments and deliver when needed. Like his defensive work, his impact on the scoreboard could improve, as a number of half-backs can still manage to kick a goal here and there, and considering he could easily develop into a winger, he could become a threat on the scoreboard himself. But being the selfless leader, he often dishes off to others and he knows when players are in better positions to kick goals. The other area to build on is his inside game, spending most of his time on the outside due to his strengths, and like many sub-180cm players, we do not expect he will have an inside role at AFL level, but it is always handy to be able to play in there if called upon. He has a sub 35 per cent contested possession rate, but again, it is more his role than him personally. Bianco wins his own ball, but is better being the player who receives it on the outside then punishes the opposition if they have not set up defensively yet. A huge talent who should go somewhere in the first or second round.