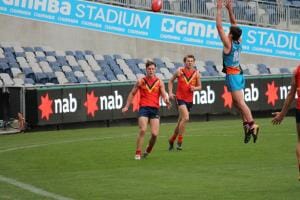 Tom Sparrow is a midfielder that can also play in defence and slide forward and kick goals. He played in every game of South Australia’s National Under 18 Championships winning team, mainly as a midfielder but also across half-back. Sparrow has the ability and courage to put his head over the football, burrow into the pack, get the ball and then explode out to break the line. He has pace and can use this to get to contests and importantly get away from them. When he does not have it, his tackling is fierce and intimidating. As captain of the Prince Alfred College First XVIII, he has leadership qualities and in the State Knockout Championships tried to carry his team to victory against the talent laden Henley team. With College footy, his time at South Adelaide has been limited but has played both Reserves and Under 18s this year and was on the verge of a League call-up. He does have areas of improvement, which surrounds his kicking efficiency and his decision making, which is the next step for Sparrow to take in order to progress to the next level.

Without fear, Sparrow can find the footy in traffic and around the feet of the ruckman, with his ferocious competitive streak, Sparrow will fight hard in the contest to win the footy and when he doesn’t to not let it out. With a tank as well he runs hard and fast and often darts away from those packs, ball in hand to drive the footy forward opening up opportunities for his forwards down the field. A no-nonsense footballer with a team first approach, he will also provide blocks and shepherd for teammates whilst working hard defensively. It is this aggressive team first approach that earned him a place in the South Australian team, and his willingness to put his body on the line when required. He does not take a backwards step, and uses his frame to impact the contest at the coalface.

The other aspect that helps Sparrow stand out from the crowd is his explosive pace and athletic weapons that can hurt opposition sides. He can burst away from a stoppage, by both acceleration and sheer strength, meaning it is hard to restrict him once he has possession and space. His contested work and ability to extract himself from his opponents has some clubs looking at him as a value get late given his athletic traits and inside abilities.

With Sparrow’s contested ball winning ability, sometimes those clearance kicks do not always find the target, which is to be expected, and so to keep improving requires Sparrow to develop this further to enhance his impact on the game. His kicking under pressure also makes his decision making decision making an area he can improve upon. Sparrow can definitely make some better decisions by foot with some development, and where he lands at a club, those areas will be something that coaches will look to address.

Tom Sparrow is one of those players that you want in your team every week. Tough, team based, explosive pace with contested ball winning ability, wrapped in a humble exterior. Sparrow would be a smart pick for a club looking to boost hardness and speed. He has clear deficiencies in the game with regards to his disposal by foot and decision making, which is what has him slipping in the draft to a late draft selection or rookie selection. Some clubs might decide to take the punt earlier in the draft based on his athletic traits, but at the least, Sparrow has put himself into draft contention with a good year.