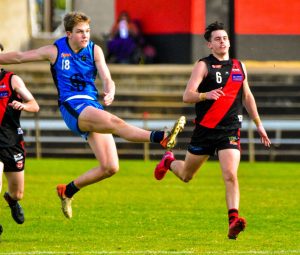 Sturt midfielder Tom Powell took the SANFL Under 18 competition by storm in 2020; capping off a sensational season by winning the McCallum Tomkins Medal as the league’s best and fairest player, whilst simultaneously leading the Double Blues to a minor premiership and subsequent grand final berth. A series of frustrating injuries plagued the inside midfielder in 2019, with hip surgery interrupting his season. However, having wrapped up his schooling at Scotch College last year, Powell was able to get on top of his nagging injuries and reaped the rewards for his hard work and patience by going on to dominate on a consistent basis for Sturt. He pushed hard for a senior debut and was named on the extended bench for the Double Blues’ League side during the middle of the year, but unfortunately didn’t make the final cut. However, Powell’s brilliance at Under-18s level has seen him rise up draft boards across the nation, to the point where he is considered by most well-trained eyes as being one of the best midfielders in the draft pool.

The son of former Sturt star Matthew Powell, Tom has a natural ability to find the ball, particularly in-tight but also on the outside. In 12 home-and-away matches this season, Powell averaged just under 35 disposals, easily eclipsing the next highest average. Throughout the year, Powell formed a terrific one-two punch with teammate Mani Liddy, with both being integral to Sturt’s successful campaign. His standout game of the season came in Round 10 against West Adelaide, where he gathered 47 disposals, 10 clearances, and kicked two goals in the Double Blues’ win. Although Powell doesn’t boast the frame of the prototypical tall midfielder, he cracks in as hard as anyone and is a terrific extractor, often burrowing in to the win the ball.

Arguably Powell’s best attribute at the coal-face is his distribution by hand. When combined with his football smarts, match awareness and elite vision, Powell’s ability to locate and hit-up open targets by hand is outstanding. He is clean at ground level and consistently makes good, quick decisions in congestion. Although Powell undoubtedly excels at stoppages, he is also able to impact the game in general play, averaging 5.7 inside 50s per game and often featuring in important handball chains through the corridor.

Along with his ability to accumulate the ball at will and use it effectively by hand, Powell’s excellent stoppage nous is another area which sets him apart from standard run-of-the-mill inside midfielders. He is a very smart player at stoppages, knowing which spaces to work into in order to impact the contest, either in a defensive or offensive manner. Whilst he doesn’t have that breakneck explosive speed, recording a 3.04 20m sprint time at the SANFL pre-season testing, he certainly isn’t slow and is still capable of breaking away from a pack and putting separation between him and his opponents. Another key component of his athletic profile is his vertical leap, having recorded a running vertical jump score of 89cm prior to the season, ranked fourth amongst competitors. Although this leap isn’t immediately evident in his game through the midfield, it could become more of a weapon when used up forward. Powell’s agility time of 8.35 seconds is also a nice aspect of his overall athleticism.

Powell’s foot skills lack damage at-times, although it should be acknowledged a high percentage of his kicks are quick ‘throw-it-on-the-boot’ type clearances, or neat short passes. Although he generates plenty of scoring chances for himself, the midfielder’s finishing in-front of goal could also do with some refinement, having kicked 11 goals and 19 behinds for the season. At 183cm and 74kg, like most young players, he will need to add a few of kilos in the off-season, however Powell could slot into an AFL midfield earlier than most draftees, simply because of his natural ball winning and well-rounded game. The Sturt star has worked hard to improve his tackling and defensive pressure throughout the year, which will have impressed recruiters.

With his ability to impact the game at stoppages, accumulate the ball in general play and distribute it well by hand, Powell was quickly compared to recent Brownlow Medallist and fellow South Australian Lachie Neale. Powell, who models his game on the Brisbane superstar, thoroughly earned an invite to the South Australian Draft Combine, but with a must-win final just days away, he didn’t test out of precaution. Powell has been able to overcome his injury concerns of 2019 and piece together a terrific season at Under 18s level, and for that, he deserves a chance to prove himself at the next level. He is best deployed as an inside midfielder, but possesses the athleticism to make an impact up forward or as an outside midfielder. Clubs seeking a natural ball-winner to add to their midfield depth should consider taking Powell in the late-first to second round range.