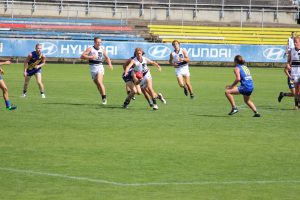 DRAFT ANALYSIS: "A smooth-moving onballer, McKenzie can play a role across multiple positions and look right at home amongst the best."

Tom McKenzie has been the standout Northern Knights draft prospect this year, putting in consistent shifts across the TAC Cup, AGSV and Under 18 National Championships. Having stood out since his bottom-aged year, McKenzie has not quite broken into the top echelon of midfielders in this year’s crop, but more than held his own against the best and adapted well to a mid-season move to half-back. Able to play in many roles, McKenzie has a valuable mix of speed and endurance, with a sixth-sense in traffic helping him to evade tackles and flick out deft handballs. While there are clear improvements to make, you know what you’re consistently going to get from McKenzie.

McKenzie started the year off transitioning to a more of an inside midfield role having featured on the wing in his bottom-age season. A smooth mover, the Fitzroy product stood out early on with his agility and ability to cover the ground with great zip and endurance.

Just as he started to show an appetite for the stoppages, averaging almost four clearances, five tackles, and nine contested possessions per game with the Knights, McKenzie was introduced to a new role across half-back with Vic Metro. Some impressive and composed performances mopping up in the back half saw McKenzie’s stocks rise as he proved himself against the best in yet another important position.

The move also forced McKenzie to kick the ball more than usual, setting up attacks for Metro. While his versatility is a real asset, it’s hard to deny that McKenzie’s best traits look best suited to the centre bounce situations. With an impressive 20m sprint time of 2.981, McKenzie has a nippy first five steps, and his clean hands allow him explode with the ball at speed and weave through opponents. His cleanliness by hand transfers to his disposal too, handballing at 72.7 per cent efficiency in the TAC Cup this year. He is able to spot up a teammate and handball cleanly despite being under pressure.

His work on the outside has also allowed him to show off his solid endurance base, working hard to cover bases all over the ground and find space to receive the ball and send it forward. McKenzie’s work rate also bodes well for his overall consistency, as he rarely has a bad or quiet game. He has been an important cog in every side he has played for, no matter what is required of him.

While McKenzie adapted to disposing of the ball far more by foot, he showed only slight improvement in his field kicking throughout the year. His kicking efficiency of 57.9 per cent in the TAC Cup is weakened slightly by his inside role early in the year, but is still down on what is expected of rebounding half-backs. He can use the ball well, but can also make mistakes, so it is just building some consistency by foot. However, McKenzie still finds the ball in important areas and has the potential to make more of the 4.3 inside 50 entries he averages.

The other area in which McKenzie’s game could improve is his scoreboard impact. While not being a forward, hitting the scoreboard is an important area for any midfielder, and his work rate and ability to pry the ball out of stoppages should see him getting in dangerous positions around goal more often. His two goals, three behinds across both the TAC Cup and National Championships means there is definitely another string McKenzie can add to his bow.

At 71kg (pre-season), McKenzie could also benefit from some time in the elite system to see his body develop, making him more suited to a midfield role. While his agility gets him out of trouble against under 18s, he will need more strength to win the hard ball at the next level and use his quick-step.

McKenzie may well be the Knights’ sole draft hope, with his skillset adaptable to many positions. While there are rafts of midfielders with even more x-factor, McKenzie has enough about him, and could well prove to be a valuable asset to any AFL side with his smarts and natural ability. He may need to work on his size to compete with bigger midfield bodies, or improve his field kicking to become a more effective half-back. Still, his work-rate and current strengths in congestion, suggest he has a place on an AFL list, with room to grow and improve.