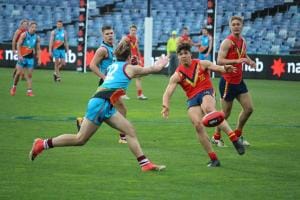 Tom Lewis played for SA in the National Under 18 Championships and played consistent football at Reserves and level for Sturt. Lewis is a tackle and inside contested ball machine. He has a thirst for the contest and has shown he is an in and under combative player, with great strength and muscle, but an ability to tackle, apply pressure and hurt opponents inside. He is a proven leader having captained St Peters College First 18 in 2018, and his game style exudes leadership with how competitive he is in every game. His speed is an area to improve, but clubs would look past this for his hunger, drive and professionalism at every aspect of his game. A real diamond for a late pick and an “old school” footballer.