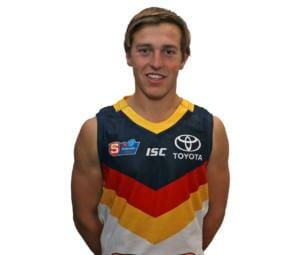 A REAL goer who took his chance with Adelaide’s SANFL side this year, Hutchesson is a readymade small prospect who at 177cm and 75kg is not a towering figure, but provides consistency with his defensive pressure, as well as his speed and agility. While he is not a massive accumulator with his disposal average of 14, he managed to play most of the season alongside AFL-listed players and not look out of place. Smaller players tend to have to do at least one thing at a high level to make the next step, and Hutchesson can build on his 68 per cent disposal efficiency to make that a real strength to go with his pace and agility. Breaching either arc and hitting the scoreboard will also help improve his overall impact, with the 24-year-old starting to hit his straps.