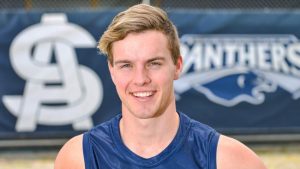 DRAFT ANALYSIS: “Originally from Canberra, Highmore is a mature-aged key defender who is strong in the air, reads the ball well, and is a capable rebounder.” – Tom Wyman

Tom Highmore was perhaps unlucky not to be picked up by an AFL club back in 2016, when he was eligible to join the GWS Giants via their prolific academy program. However, Highmore hasn’t given up on his AFL dream and, after being named in the NEAFL team of the year last season, joined the South Adelaide Panthers for their 2020 campaign. Making his SANFL League debut in Round 1 at Adelaide Oval, Highmore immediately looked comfortable playing a key position role in defence. He was paired up with veteran full back Jake Summerton for much of the season and also combined exceptionally well with running half-backman Joseph Haines. Haines and Highmore appeared impenetrable at times, with the duo controlling the airways and also providing plenty of rebound. Highmore suffered a nasty ankle injury in Round 7 which sidelined him for a month, but he returned to the side for the Panthers’ finals campaign and was a valuable component of South’s backline. He was rewarded for a sensational season with an invite to the National Draft combine.

Those who saw him play this season will have little doubt Highmore’s standout attribute is his marking ability. Up until his injury, Highmore led the league for marks – a particularly impressive statistic given his lack of prior SANFL experience. Highmore possesses the ability to beat his opponents in the air in several different ways. He reads the play exceptionally well and knows when to peel off his opponent to impact the contest further afield. It was these traits, combined with his unquestionable courage, which made him such a dominant intercept marker throughout the season. Highmore is also a strong one-on-one defender and, in season 2020, demonstrated an ability to lock-down on some of the SANFL’s most potent key forwards, including Crow-turned-Rooster Keenan Ramsey, whom he restricted to just seven disposals and zero goals in the final round of the home and away season.

At 192cm and 89kg, Highmore is big and strong enough to handle most key forwards, but his athleticism has also enabled him to play on medium-sized opponents at various times. Highmore is not simply a shut-down defender, but one who can also provide plenty of rebound thanks to his neat skillset and sound athletic profile. The 22-year-old was trusted with the kick-in duties on several occasions throughout the season and showed he could not only make good decisions with ball in-hand, but back his skills to hit targets which some tall defenders simply wouldn’t attempt. He finished the year with a disposal efficiency of 79% from 12 games.

Prior to his injury, Highmore was finding an abundance of the ball for a player of his size. He averaged 22.6 disposals through his first six league games and also took over 10 marks three times. Arguably his best game came in South Adelaide’s Round 4 win over Sturt, where the defender gathered 27 disposals, 11 marks (including two contested marks), laid five tackles, sent the ball inside 50 on six occasions and also managed to provide eight rebounds. Although his production tailed off towards the end of the year, averaging 11.5 disposals in his final four matches, Highmore showed he is much more than just a defensive negator.

There aren’t many glaring weaknesses in Highmore’s game, but adding an element of versatility would certainly increase his value to any potential AFL suitor. Although he is able to play a range of defensive roles down back, Highmore hasn’t yet proven himself higher up the ground, either as a tall midfielder or in attack. However, given his contested and overhead marking capabilities, courage and natural athleticism, spending some time in attack could greatly benefit Highmore as he continues to learn his craft down back.

Despite being overlooked as an 18-year-old, Tom Highmore has persisted with his footballing and is now one of the most sought-after mature-aged prospects in the draft pool. Having been a strong and consistent performer for a couple of years at NEAFL level with the Canberra Demons, Highmore headed to South Australia with high hopes. He exceeded all expectations in his first year with the Panthers, becoming a focal point down back while mounting a strong case for recruit of the year. His performances have not gone unnoticed by AFL recruiters, so don’t be surprised to see a club looking to add to their key defensive depth take Highmore in the middle to late stages of the National Draft, or as a rookie.