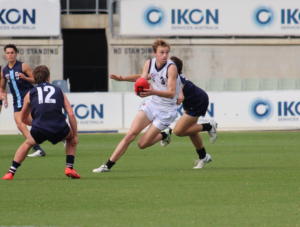 IT is remarkable to think that the Camperdown product is a midfielder at 194cm, but that seems to be Mahony’s best position. Having played in both the midfield and at half-forward, Mahony still has areas to develop, but moves well for a tall. He has an 8.08-second agility test and showed the versatility to be able to play at half-forward roaming up and down the ground. Areas of improvement include his strength – he stands at just 83kg having put on 6kg since the start of the season – and his kicking consistency, though he has a long raking kick that can be effective when going inside 50. His best trademark is his ability to shrug or evade an opponent and give the clean hands off to a running teammate. He never finds a heap of the ball, but has moments that you remember due to a clever move here or there. Playing with Vic Country at the Under-18 Championships, Mahony did not look completely out of place in his game, with 10 touches, two marks, three tackles and two inside 50s. Overall, clubs view Mahony as a long-term prospect.