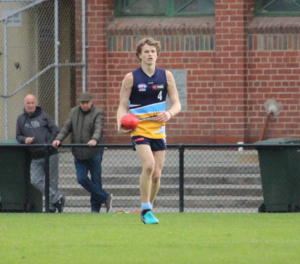 DRAFT ANALYSIS: "Dow is an athletically gifted midfielder with great inside-ball winning abilities and can hit the scoreboard."

ONE of Bendigo’s top midfielders, Dow is a player who is hard to place on the draft boards, one of a number of players in that late first round onwards log-jam. Most of the players there have plenty of upside and a number of attractive strengths to AFL clubs, while still having a number of areas to build upon going forward. For Dow, his clearance work and ability to move well on the inside is a key feature of his game, not too dissimilar to his brother Paddy. Athletically he is among the top midfielders going around, and he is terrific at the stoppages. Once he builds his consistency and endurance, Dow has the scope to become even more damaging through the middle.

Standing at 183cm but just 76kg, it is clear that Dow will need to add size to his frame upon entering the AFL system. He has the athleticism to challenge senior players at the next level, recording a 77cm running vertical jump at the National Draft Combine testing and blitzing the agility test in a time of 8.06 seconds, slightly behind his time of 8.02 in the pre-season testing. His 20m sprint of 3.06 seconds is about average. He spent time inside 50 resting as a lead-out forward with strong hands and showing off his capability in that role. His contested marking was impressive, averaging more than one per game from his 4.4 marks. Dow averaged a goal a game in the forward role, and when he was not kicking goals, he was setting up his teammates, playing his best game of the season in this role in the Wildcard Round against Northern with seven inside 50s. His best game in entirety was the Round 2 win over Murray Bushrangers where he amassed 24 disposals – at 82 per cent kicking efficiency and more than 50 per cent contested – four marks, seven clearances, two inside 50s, four tackles and a goal.

While Dow has the athleticism and talent to be a really damaging prospect he does have to iron out some consistency issues. His best is as good as a lot of prospects in the 2019 draft crop, but he can tend to fade in and out of games at times, such as during the Under-18 Championships. In the last two games for the Pioneers, Dow averaged 23.5 disposals and was able to have more of an impact over four quarters. Earlier in the year he was impacting games for a couple of quarters and then fading out in the other couple. Much like the consistency within games, Dow’s kicking consistency itself is an area of improvement. He wins a lot of contested ball which is why kicking efficiency statistics – Dow finished the year with 52 per cent efficiency – can be misleading. However, he could show more composure at times because he often has more time than he thinks and can gain separation from his opponents using his agility and speed. Another area of improvement that will come is his strength, which at 76kg can continue to build having added a few kilograms to his pre-season size. Overall, Dow has serious upside and talent, with a good development program likely to see him reach his potential.