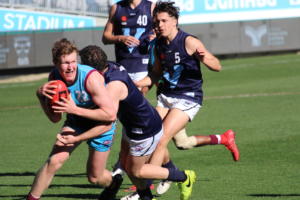 DRAFT ANALYSIS: "The premier pure inside midfielder in the draft crop, Green is an elite accumulator, contested ball and clearance winner."

A PLAYER who some have described as the next Patrick Cripps, has been touted as a potential top five draft pick and one of the best contested ball winners in the 2019 draft class. The GWS GIANTS will be licking their lips as they have first dibs on Green – who is a member of their Academy. Green had a stellar season in both the NAB League and AFL Under-18 National Championships. He was best on ground in the first four games of the NAB League that he played, and he earned All-Australian honours in the Under-18 championships, along with being awarded the Allies Most Valuable Player. He averaged more 23 disposals and eight clearances a game – elite numbers. Green would end up injuring his knee late in the season, which would force him to miss testing at the National Draft Combine. Luckily, he was able to avoid surgery. Nonetheless, recruiters have seen enough of Green throughout the year to determine how good of a player he is, so his draft range will not be negatively impacted.

Green started the NAB League like a house on fire, gathering total possession counts of 29, 25, 38, 37 in his four matches for the GIANTS Academy. He was pretty much unstoppable on the inside, consistently gathering first possession of the footy before disposing of the ball effectively to his teammates on the outside. This is where Green is a class above among the 2019 draft class. His strength, competitiveness, and quick hands are some of the major attributes that make him stand out against his opponents. Green’s ability to read the taps of his teams’ ruckman is second to none and it was evident throughout both the NAB League and Under-18 National Championships. Even though he wins the majority of his possessions on the inside, Green can also win the ball on the outside, too. Averaging a ridiculous 10 clearances a game at NAB League level, Green is too strong against his peers and regularly gets front position at a stoppage. Combine this with his natural ball-winning ability and clean hands once in possession, and Green can open up a game for his teammates. Green is dual-sided and can exit a stoppage using either his right or left foot to bomb the ball long, but that too is an area of improvement.

Green is pretty consistent as a whole, but the one area he could improve is his disposal under pressure, particularly coming out of a stoppage. He tends to throw the ball on the boot to gain distance – as well as a clearance for his side – and while it can be effective depending on the game, having the composure to take the extra split second to dispose of it would improve his game further. Many might argue he does not have the athleticism to be able to have that extra split second, but his apparent lack of athleticism is a myth. He runs a three-second flat 20m sprint and an 8.242-second agility test, and that was 18 months ago at GIANTS pre-season testing. With terrific endurance, Green has the dangerous mix of athleticism across the board. The reason the myth of his athleticism comes about is because in-game he can tend not to use it as much as he could. Lots of players are in the same boat, but when exiting a stoppage he could add the extra burst in and potentially give himself the extra second or two to dispose of the ball. The most exciting fact about this for GIANTS fans is that if he starts to use more of his athleticism in games, his composure with his kicking will also lift as his confidence grows. Overall, Green is a genuine star in the making, and it is not surprise to see him potentially landing in the top five picks, which is why the GIANTS are so keen to trade up and pick up a second player in the top 10 before a bid comes in.