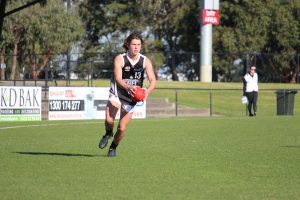 DRAFT ANALYSIS: "An uncompromising inside midfielder who never takes a backwards step and can play anywhere on the field."

Tom Berry is one of those players who has experienced plenty of his two years in the TAC Cup Under 18s system. After missing the second half of his bottom-age year due to injury, Berry came back only to be concussed in Round 1 when he collided with a behind post at MARS Stadium. He was influential in his three quarters that day, and earned a place in Vic Country’s squad, playing every game in the unfamiliar position of small defender. Playing on the likes of Izak Rankine, Curtis Taylor and Ian Hill, Berry held his own, playing more of a defensive role than offensive one, something that crowds had become familiar with watching him at MARS Stadium. He is an elite athlete, having clocked a mind-boggling 7.92 seconds on the agility test in the pre-season. His blistering acceleration of 2.944 seconds is another test he is near best in the competition at, and these attributes are what will determine where a club takes him. His great combination of power and speed, along with his versatility will have plenty of clubs interested, however the areas that see him drop in the rankings is his kicking and decision making, both of which could be improved.

Berry has a number of strengths which will appeal to AFL clubs. Most notably, his athleticism through his acceleration and agility is the biggest tick. Berry’s ability to change direction in a game and power away from a stoppage is important, combining his great acceleration with power to shrug off would-be tacklers and send the ball long. He has a penetrating kick which can travel more than 50m, however as mentioned, it is an area of improvement. Berry is predominantly inside midfielder who can play off half-forward, and as we saw at the National Under 18 Championships, also play a role in defence. Given his strengths of speed and power, one would think that the inside is a role he will play AFL level. He is 185cm, so that medium height that is still more than capable of playing on the inside, and his endurance, while not elite like his brother, Jarrod, is still very solid and he can play in there full-time in the future. His experience at playing up both ends has added extra strings to his bow, and while given the areas he needs to work on, means he will likely settle into a position forward of centre, his experience in the defensive role will help him develop in the future.

For all the elite athletic traits Berry has, he does have a couple of clear improvements to make to his game. The first is his kicking. He averaged just 42.6 per cent by foot in the TAC Cup, and that was with a 40.6 per cent contested rate. His kicking can be improved in the sense that sometimes he throws it on the boot or tries to opt for distance over a shorter option. It is this decision making which is another improvement Berry can make to his game. Sometimes it is a case of just lowering the eyes or picking out a player laterally in space rather than a long, deep bomb to a well-positioned defender. No doubt both these areas are ways in which Berry can improve, and given he has the athleticism, clubs will be looking to develop his thinking with ball-in-hand.

Tom Berry is an elite athlete who loves a contest. He attack the ball with vigour, and while he has not had a clean run at it, he has still shown some promising signs. Most notably, Berry has added versatility to his bow in season 2018, however his kicking and decision making still needs work. The most agile player in the draft crop and one of the top speedsters on offer, Berry will still have no shortage of clubs looking at him, with the goal of working on those improvements. When he gets the ball, if you give him an inch he can burn you in a second, so his acceleration and power will excite plenty of fans at whichever club he lands at, joining brother Jarrod at the elite level.