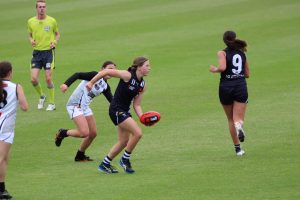 Tess Craven has been one of the biggest and brightest talents of 2021, with a massive season through the Geelong Falcons midfield. After getting the handle of it in her first couple of years, Tess Craven exploded this year to win the club best and fairest and really standout as a prominent inside midfielder.

When speaking about the top inside midfielders in the AFL Women’s Draft crop, it is hard not to consider Craven as one of the best. Her inside game, clearance work and contested ball-winning ability is top notch, credit to her high work rate. In the 2021 season, Craven was consistently racking up high numbers and throwing herself into every contest, then able to create separation through smarts and some toe.

In terms of ‘safe’ options, there are few safer than Craven, who ticks a lot of boxes when it comes to her overall game. Whilst she has made her name as that inside midfielder and could add more strings to her bow across the field, her traits lend themselves to be able to move around if required, though naturally she should be that prominent inside player. Having no issues finding the ball, Craven generally makes the right decisions by hand or foot, and whilst others can have more penetration, her short, sharp disposals, or disposal on the run generally hits the mark.

Having collected the Falcons’ best and fairest, Craven hardly put a foot wrong all season and deservedly earned a Vic Country spot in the Under 19s program. She won the majority of her possessions at the coal face and spread well from the stoppage to outwork her opponent with a high work rate. In terms of readymade players, Craven could step straight into a side and her development over the past few years has been as impressive as anyone going around.

“Arguably the best pure inside midfielder in the Victorian pool, Craven has had quite the season for the Falcons. She won the Falcons’ best and fairest award, averaging 21.1 disposals, 4.4 marks, 3.3 inside 50s, 2.0 rebound 50 and 3.9 tackles, then played the two games with Vic Country for 20.5 disposals, 6.0 clearances and 5.0 tackles. She is an inside ball winner and one who can extract it out of the contest going forward. She is smaller than other inside midfielders at 163cm, but she can gain separation at the stoppage and has the footy smarts to be able to use the ball well under pressure. She is also clean and gets her hands dirty at ground level, which is something that stands out in her game at any level.” – Peter Williams via “Draft Central AFLW Draft Power Rankings – Victorian Pool: June 2021”

“The inside midfielder produced a remarkably consistent season in 2021, averaging more than 21 disposals, as well as four marks and four tackles per game for the Geelong Falcons in the NAB League Girls. She won the club best and fairest, and was a standout performer for Vic Country as well, consistently cracking in on the inside and clearing the ball from danger. One of the top inside midfielders in the draft crop this year, Craven certainly shot up this year having averaged the seven touches from two games in the limited 2020 season, but showed with her ball use and decision making, that she can have a real impact on the game in the forward half.” – Peter Williams via “Ones to Watch: AFLW Draft eligible surprise packets”

“Coming into the season as a relative unknown, Craven was a vital cog in the Falcons’ engine room throughout the season. Never dropping below double digit disposal numbers for the season, and only going below 16 once, her consistent ball winning and follow-up ball use kept Geelong in possession and got them into dangerous areas. She’d also work hard off the ball to ensure she was an option, usually as a switch kick or a short inside outlet. A Vic Country Under 19 representative like many of her teammates, Craven brought the same strengths to Country in her two appearances.” – Declan Reeve via “2021 NAB League Girls team review: Geelong Falcons”